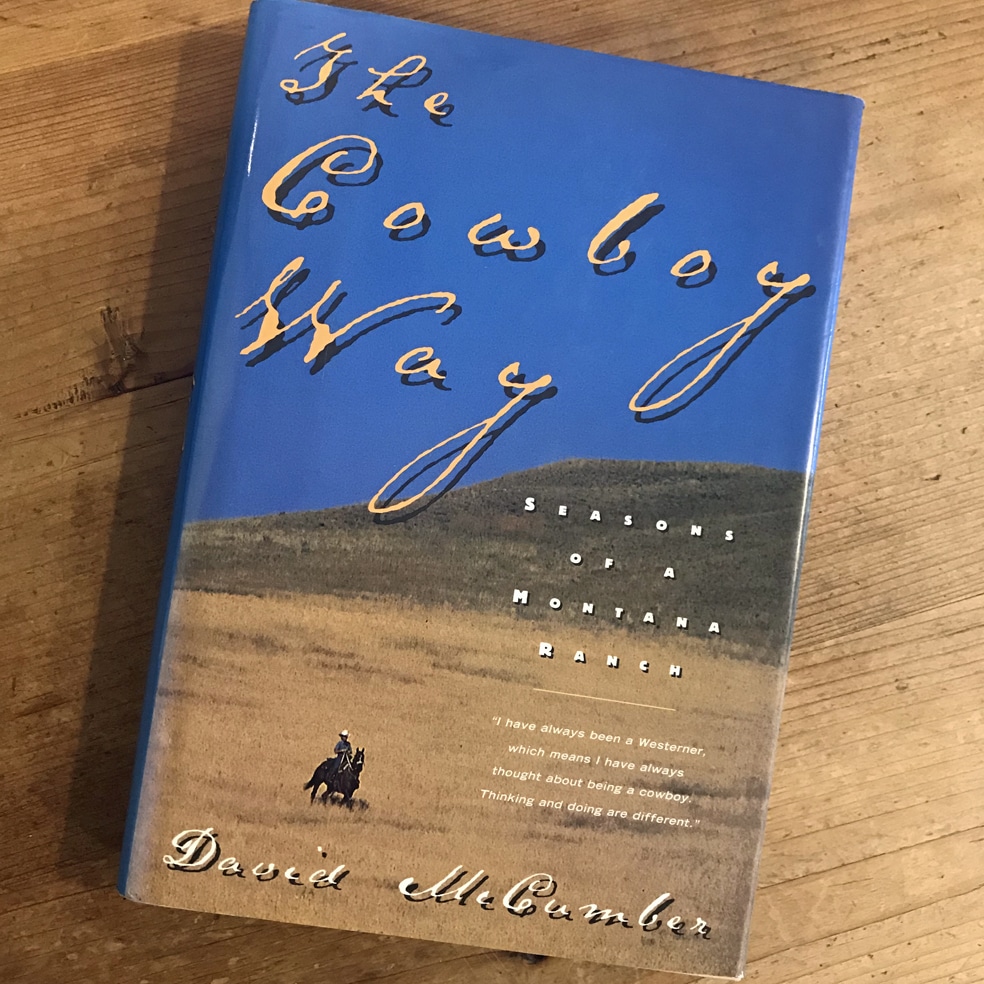 At some point in our lives, most of us wonder what it would be like to take a break from everyday life and sail round the world, cycle across America, walk the Route Napoleon or fulfil whatever other ambition has always been there at the back of the mind.

The problem is, there’s always a reason why now isn’t a good time. Today I use the excuse that our youngest is still at college but that’s all it is, an excuse. So instead I devour books by people who have the guts to do it.

As a boy, David McCumber wanted to be a cowboy. In the late 1990s, as a 44-year old journalist based in Montana, he lived the dream, joining rancher Bill Galt’s Birch Creek spread for a full 12 months.

His book, The Cowboy Way – Seasons of a Montana Ranch (Avon Books Inc. 1999) is the result, and the first thing you discover is that, however hard you think your job is, however long the hours, however demanding your boss, it’s nothing compared with the life of the cowboy.

Every day is a succession of endless, repetitive and demanding tasks, from cleaning out straw soaked in the stench of a few hundred head of cattle, to fixing mile upon mile of fencing while chest-deep in snow. Then there’s the job of depositing the carcasses of dead calves at the dump, a nightmare vision of decomposing bovine bodies providing lunch for dozens of flesh-eating birds and something “you’ll never see in a Coors commercial”.

The seasons bring new but no less difficult challenges. Spring’s the time for branding, vaccination and castration, the latter process being described by one old hand as “brain surgery – changes the calf’s mind from ass to grass”. In summer, irrigation ditches need to be managed morning and evening – there’s no finishing until the job’s done. And as fall approaches, fires have to be fought, another job with no clocking off at five thirty.

While it’s hard work, it does have its rewards. There’s the exhilaration of pulling a live calf from an agitated cow, even when “your back feels like someone dropped a piano on it and you have cowshit and blood up to your shoulders”. And of course there’s the opportunity to live your life active and outdoors, under Montana’s huge skies.

It’s evocative stuff and a compulsive read from start to finish. At no point do you get the impression that this is a soft-handed media guy playing at cowboys; McCumber is clearly someone with a deep love of the outdoors and respect for the tradition of the American West, and is determined to immerse himself in this brutally hard life.

Over here in England, it’s probably more traditional to dream of being a train driver but, having lived a year on the Birch Creek ranch through McCumber’s words, I’m officially adding the dream of “being a cowboy” to the list of things I’ll almost certainly never get around to actually doing.

Base Camp Las Vegas – a review