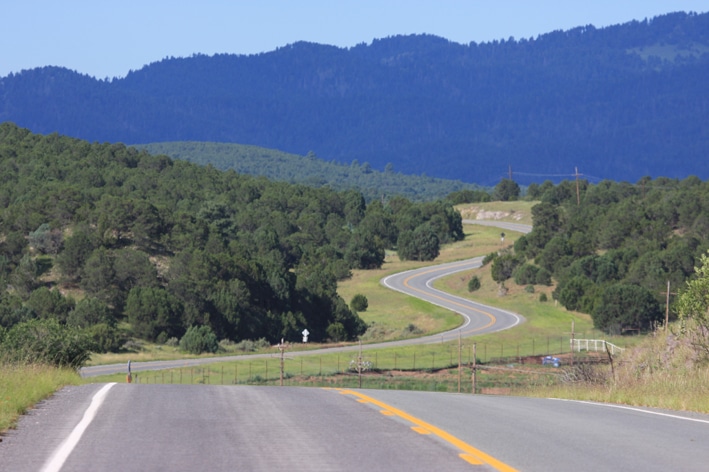 Tread in the footsteps of the West’s most famous outlaw and pay your respects to the nation’s favorite bear. This drive follows two of the three sides of the beautiful Billy the Kid Scenic Byway, taking in the town of Lincoln, site of the infamous Lincoln County War, calling in at the final resting place of Smokey Bear then heading north to the ‘ghost town’ of White Oaks.

Here are some highlights along the route.

Ruidoso, New Mexico (Starting point)
Situated high in the Rocky Mountains, Ruidoso, is a year-round destination whose attractions range from the nearby Ski Apache resort to galleries, golf courses and casinos. It’s also the perfect base from which to explore this region, with excellent shopping, dining and lodging facilities.

Ruidoso Downs (mile 7)
Head east on US Hwy 70 and almost immediately you’ll be in Ruidoso Downs, home of the richest race in American Quarter Horse racing. Be sure to call in to the Billy the Kid Byway Visitor Center for an introduction to the route you’re about to follow.

San Patricio (mile )
The small town of San Patricio was once a favorite hangout of Billy the Kid. Today, like Hondo just a few miles further on, it is home to a thriving artists community with a number of highly respected galleries including the Hurd La Rinconada Gallery. This section of the drive, which passes by the orchards and farms of the Hondo Valley is particularly pretty.

When you reach Hondo, turn left onto US Hwy 380 and the landscape immediately becomes more rugged and ‘Western’ as you climb the foothills of the Capitan Mountains.

Lincoln State Monument (mile 34)
A few miles north you’ll reach the small community of Lincoln, site of the Lincoln County War, a bloody feud that made the name of a teenage William H Bonney, aka Billy the Kid. Allow a good hour or so to visit the museum and then walk the main street, exploring at the Court House, stores and other buildings that featured so prominently in this historic event.

Fort Stanton (mile 38)
This optional diversion takes you along NM Hwy 220 to Fort Stanton. Over the years this has been a base for the Buffalo Soldiers of the Ninth Cavalry, and Billy the Kid was held in the guardhouse. While much of the site is off limits to the public, the museum is worth visiting as is the nearby Merchant Marine and Military Cemetery.

If you want to complete the Scenic Byway loop, head back south to Ruidoso on NM Hwy 48, a lovely 2-lane road that travels through a countryside of gently rolling hills. Alternatively, continue through Capitan to Carrizozo, turn right onto US Hwy 54 then right again on NM Hwy 349 to White Oaks – it’s clearly signposted.