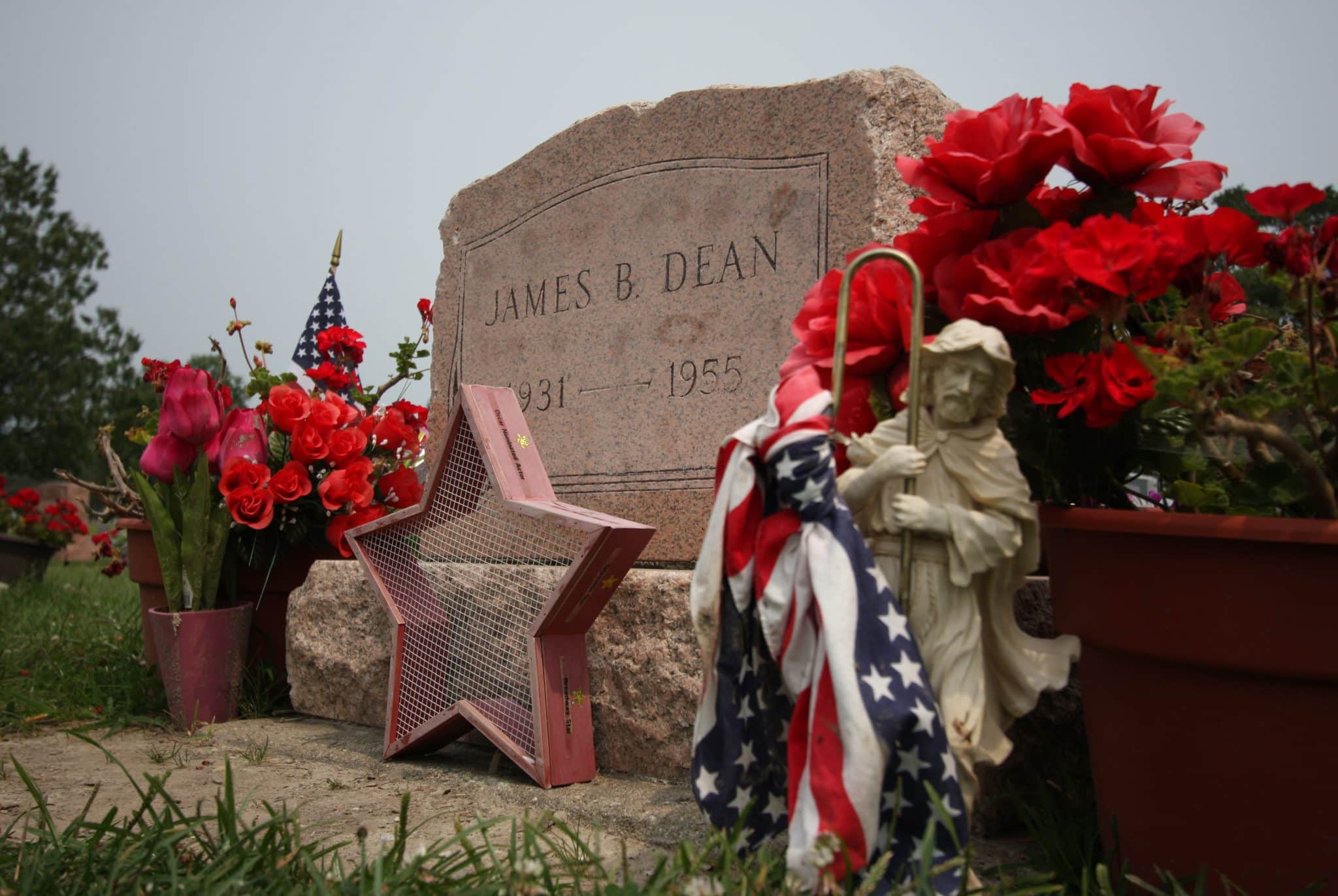 For my wife, no adventure is complete without a visit to the final resting place of some dead celebrity or other. Over the years, and I’m really not complaining here, this has taken us to Grace Kelly’s grave in Monte Carlo; to Père Lachaise Cemetery in Paris, whose residents include Yves Montand, Jim Morrison and Edith Piaf; and to De Smet, S.D., the Little Town on the Prairie where most of the Ingalls family are buried.

While I don’t share Carole’s obsession with boneyards, I reckon they’re as good a reason as any to travel. Few places beyond the real big-ticket attractions are worth the trip in their own right anyway – they’re simply an excuse to hit the road. And it’s for this reason that I’m perfectly happy to be facing a 190-mile drive through Indiana with the sole purpose of visiting Park Cemetery in the town of Fairmount, site of James Dean’s grave.

The only thing I know about Indiana as we enter it over the Ohio River is that it’s one of only two states whose capital city includes the state name. (I’ll leave the other one with you for a while.) No preconceptions means a blank canvas, so it’s rather a shame that the very first town we drive through is a filthy-looking place with the wonderfully descriptive name of Cementville.

However, within no time at all, Indiana redeems itself as U.S. Highway 31 conveys us past Clark State Forest, 100 square kilometers of woodland trails and fishing lakes. It’s lunchtime and there’s bread, ham and fruit in the cooler so, within minutes of discovering America’s most depressingly named town, we’re enjoying the peace and tranquility of a picnic by the side of a still lake.

Back on the road, we settle into the one-hundred-or-so-mile drive that will take us to our stopover point for the night, Indianapolis. So what can I say about southern Indiana? Well, not a great deal, to be honest. There are trees and fields so it’s a perfectly pleasant part of the world, but it’s not a landscape to inspire.

In fact, it soon becomes one of those drives where sight of traffic going 70 miles an hour on the adjacent interstate provokes a sense of frustration rather than superiority, so when the opportunity presents itself to get off what, on another day, I might have thought of as a romantic back road through Smalltown, USA, we grab it with both hands and head north on Interstate 65.

Over lunch, I’d seen that our 800-page U.S. guidebook considered the state of Indiana worthy of just four pages, but that one of the handful of attractions listed – the city of Columbus – lay directly on our route. So, turning off the Interstate at Exit 68, we head into what is officially the nation’s sixth-best city in terms of architectural innovation.

Since 1942, the city’s biggest employer, Cummins Engine Co., has funded some of the world’s leading architects to design more than 60 churches, schools, banks and public buildings. The result is a built environment ranked by the American Institute of Architects alongside those of Chicago and New York.

I have to say that it leaves me a bit cold. There are all sorts of geometric designs in glass and concrete and I’m sure that if I understood the language of architecture I’d be suitably impressed, but it just feels as if it’s trying a bit too hard to be noticed, like people who wear bow ties.

What it does do, though, is provide a contrast to the old-fashioned beauty of the capital city, just 40 miles north.

From a distance, Indianapolis is just another big American city, a dozen or so tall buildings marking the downtown area out from the seemingly endless sprawl of redbrick residential and industrial blocks. Arriving in the centre, though, it feels more European than any other city I’ve visited in the USA.

Right at the heart is the State Soldiers and Sailors Monument, a 284-foot-tall construction designed by German architect Bruno Schmitz in the late 1880s to honour the veterans and fallen of various conflicts including the American Revolution, the Mexican-American War and the U.S. Civil War. With the fountains and military statues that sit around its base, and the architecture that lines the outer edge of what’s known as “Monument Circle” (including a church, a theatre and assorted pavement cafes), you could just as easily be in Vienna or Budapest.

And while the character and charm of the old city doesn’t extend beyond more than a few blocks, it’s a place with a real buzz about it. The bars and restaurants are packed, the streets are busy and the atmosphere’s friendly.

The next day, after walking off breakfast along the Central Canal, we make our way out of the city on North Meridian Street, through districts full of old apartment buildings that have clearly seen better days.

Just north of the junction with 40th Street, the architecture changes dramatically as we enter the North Meridian Street Historic District, a two-mile stretch of road where, in the early part of the 20th century, Indianapolis’ elite vied with one another to build ever more palatial mansions. The fact that they all remain in private ownership means there are no tours to take or leaflets to pick up; it’s just a drive past other people’s houses but a remarkable one nonetheless.

Five miles further on, we pick up U.S. Route 31 and begin the last leg of our pilgrimage to James Dean’s final resting place. It’s a slow and fairly unexciting drive and by the time we finally reach Fairmount, I’m beginning to understand Dean’s motivation for escaping the Midwest for somewhere more stimulating. But the moment we walk into the Fairmount Historical Museum, I’m won over completely.

Most small town museums are full of stuff “similar to” that which the local hero “probably would have owned,” items “of that period.” Not so here. The four or five rooms that make up this museum are packed full of James Dean’s own clothes, letters, photographs, school reports, motorbikes, toys and other memorabilia donated both by the local community and by his film star friends.

Actually, there is one room without any Dean paraphernalia. That’s because it’s dedicated to the town’s other famous son, Jim Davis, creator of “Garfield.” That’s got to be unlucky, hasn’t it? If he’d been born in nearby Aroma, Leisure or Prosperity, he’d have an entire museum to himself. Instead he has to make do with a side room in a shrine to someone else.

Park Cemetery itself is a big place, far bigger than you’d expect of a town with a population of less than 3,000, so the map they give you at the museum is essential. And there it is: a modest headstone bearing his name and the years 1931-1955. Nothing more. It’s no different from the hundreds of other headstones here, just as Fairmount’s no different from thousands of other towns in the Midwest.

But therein lies the appeal of this kind of trip. It’s an excuse to travel through a countryside that’s new to us, to experience at least something of a state that has no Grand Canyon or Mount St. Helens to tempt us in. I may not understand Carole’s morbid fascination with dead celebrities, but I’m more than happy to tag along.

That other state capital? Oklahoma City.