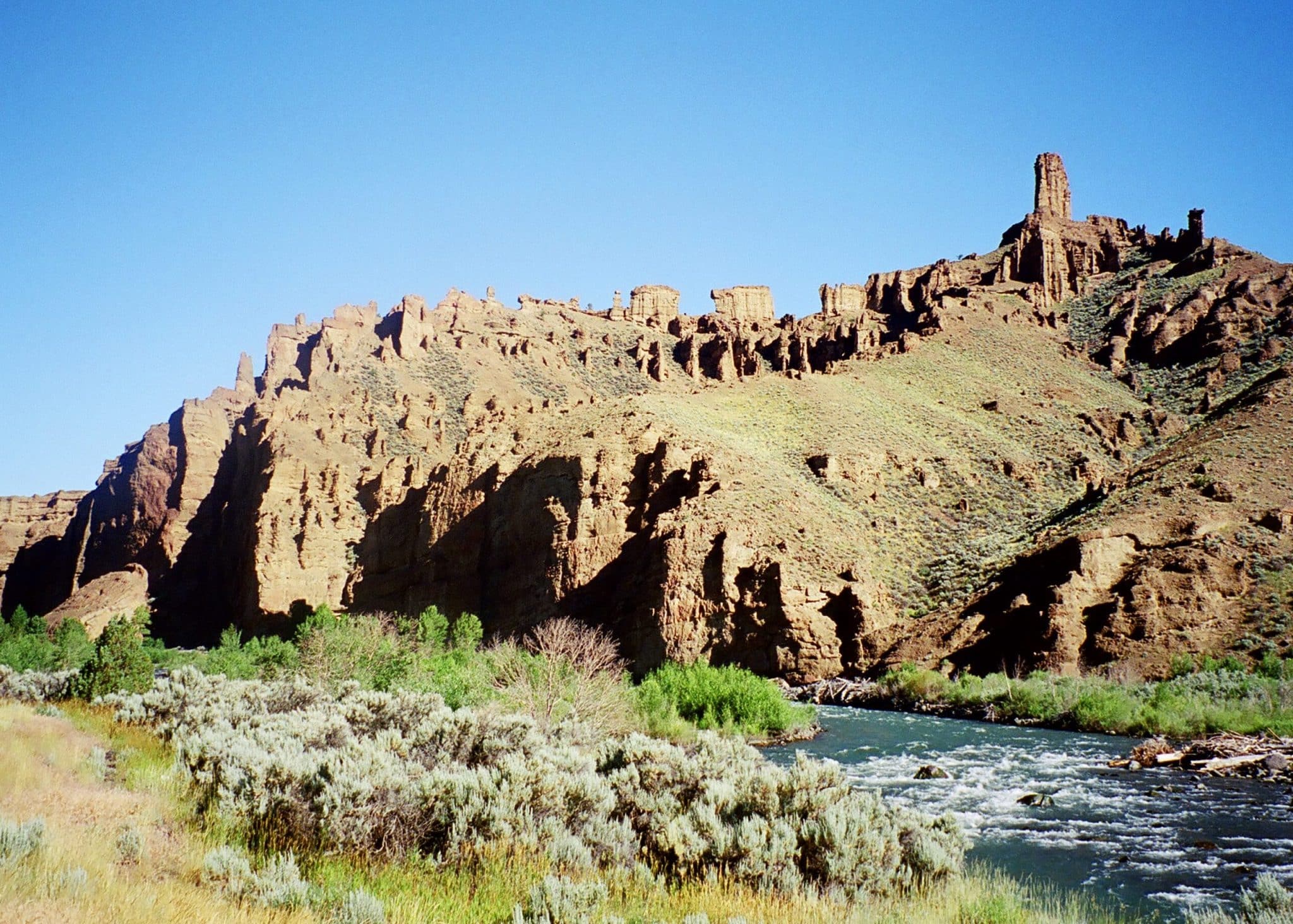 The Shoshone River runs through Buffalo Bill State Park, a spectacularly rugged canyon carved from volcanic rock by the Shoshone River. Theodore Roosevelt called it "the most scenic 50 miles in the U.S." 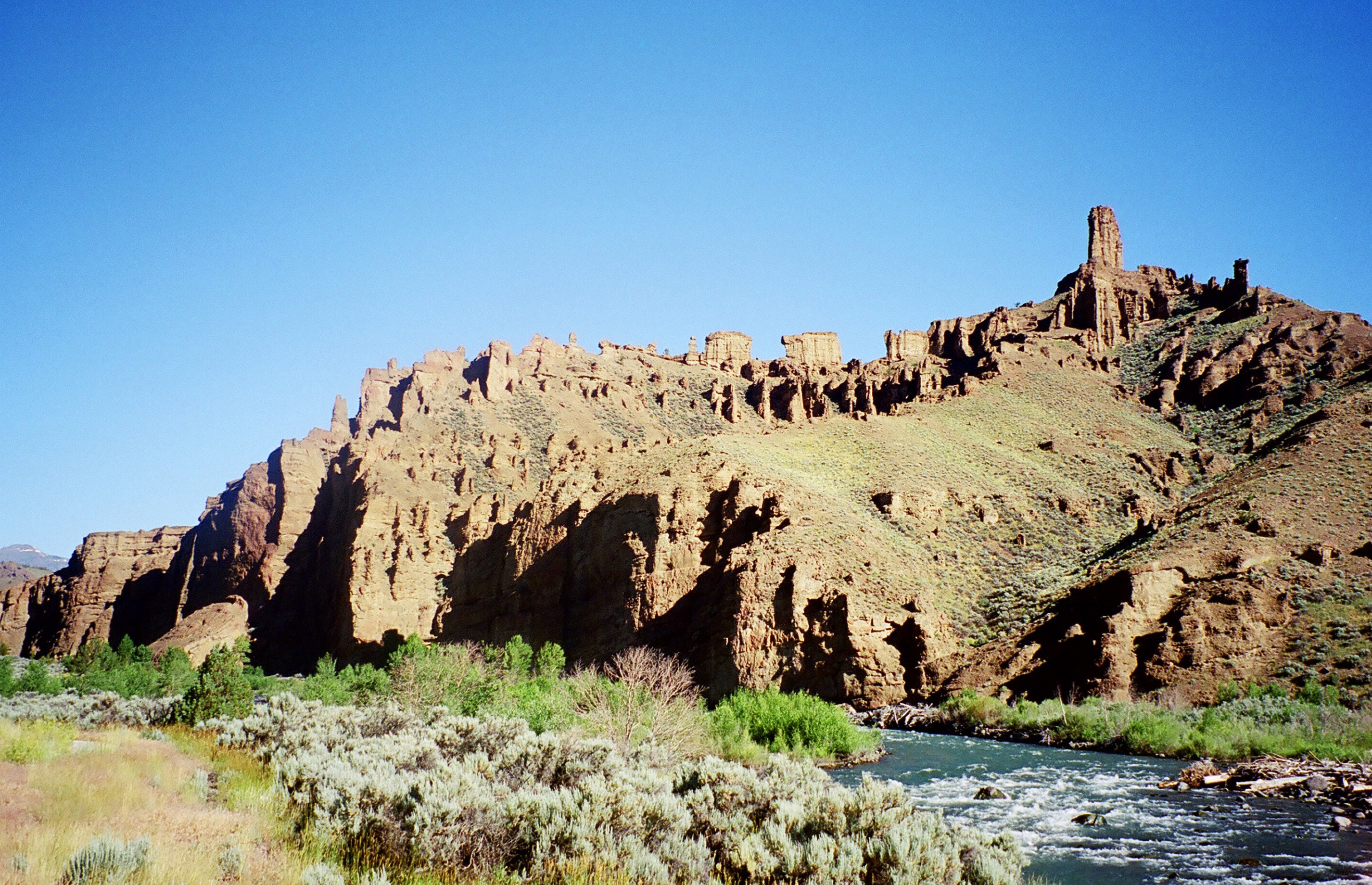 Back road purists might disapprove, but there are times when to follow anything other than the interstate would be contrary. Check a map of northeast Wyoming and you’ll see that virtually all those tempting red and yellow roads run either north-south or diagonally. If you’re heading west across this section of the Cowboy State, the only lateral route is the thick blue line of Interstate 90.

This is no six-lane highway, though, and there’s certainly no sense of being on the longest interstate of them all – 3,099 miles, stretching all the way from Seattle, Wash., to Boston, Mass. For the most part, it feels like just another two-laner, albeit with a parallel one running in the opposite direction just over the median.

There is next to no traffic, so it’s easy to sit back and enjoy the wide open expanses of the least populated state (there are just 522,830 Wyomingites – more people live in Washington, D.C.). In a landscape of sage and grass on gently rolling hills, the views are immense; it’s hard to imagine the skies of “Big Sky” Montana, just 60 miles to the north, being any bigger. In many places, the only thing between us and the distant horizon is a sea of waving grass.

Ah, yes, the distant horizon. Just what was that bump on the horizon we saw a few miles back? As movie buffs, UFO conspiracists and anyone whose commitment to planning and map-reading extends beyond spotting a blue line will already have worked out, that “bump” was Devils Tower National Monument – the 1,267-foot-high extinct volcano that is a central feature of Steven Spielberg’s “Close Encounters of the Third Kind.”

A brief diversion onto State Highway 14 would admittedly have delivered a more satisfactory view but, to be perfectly honest, such is the joy of driving through the high desert that it doesn’t really matter. The skies are virtually cloudless, the heat is intense and the scenery is, well, I can’t think of a better word than “Western.” We rise and fall with the swell of the hills and valleys; we see real cowboys on real horses herding real cattle; and we pass communities surrounded by rusting trucks arranged like pioneer wagons circled in anticipation of an Indian attack. It’s a day of deep pleasure and enjoyment.

After overnighting at the WyoMotel in Buffalo, a picture-perfect motel complete with open-air swimming pool, we continue west, this time on State Highway 16 – or “Sweet 16” as the local tourist leaflets claim it’s known. The road takes us through the southern end of Bighorn National Forest, past midsummer snowdrifts as we climb up through the Bighorn Mountains and down through the spectacular Ten Sleep Canyon, a magnet for rock climbers.

At the town of Ten Sleep itself, so named by Sioux Indians because it lies 10 sleeps from their main winter camps, we stop for coffee at a store-cum-diner. It’s the kind of place where, instead of notices about yard sales and PTA meetings, they have leaflets illustrating the different silhouettes of black bears and grizzlies so you’ll know which one to shoot (grizzlies, an endangered species, have a distinctive hump at the shoulder).

Our presence is noted by an old guy who has the look of someone who comes in every day to drink coffee and make conversation with whoever else happens to be here. Sure enough, he looks over and nods. “How you guys doin’?” he asks. “Great, thanks,” I reply. “And you?” “Happier than a Minnesota deer hunter,” he assures us, following up this news with a quiet laugh that puts a smile on the face of everyone else in the room. Satisfied that we’ve been made welcome, he goes back to his coffee and leaves us to ours.

We reach the city of Cody in time for lunch and, after checking into the Econo Lodge Moose Creek, find ourselves a table outside the Silver Dollar Bar, order beer and burgers, and sit back to watch the world go by. In these parts, what’s likely to go by is either a thumping V-twin Harley or a burbling V8 pickup, so the sound actually becomes a physical sensation, like sitting so close to a bass speaker that you can feel it.

Cody was named after William “Buffalo Bill” Cody and it wears its history with pride. The hotel that this soldier/hunter/showman built and named after his daughter, the Irma Hotel, remains a focal point of the town, and shootouts are staged outside, six nights a week, throughout the summer.

Just down the road is the Buffalo Bill Historical Center where, like us, you should ignore the fairly unambitious advertising – “The Best Hour You’ll Spend in the West” – and spend a full afternoon – or longer – exploring the Buffalo Bill collections, Plains Indian artifacts, Western art, stuffed animals and historical firearms that are housed within what are actually five museums all under one roof.

In the evening we visit the Cody Nite Rodeo to drink Coke, eat popcorn and watch young men tread the fine line between success and quadriplegia for our entertainment. The idea is to hang onto the bull for eight seconds and earn points for riding it with as much panache as possible. Many riders fall off, at which point a bull-fighter (commonly known as a rodeo clown) jumps into the ring and does his best to divert the enraged beast’s attention while our fallen hero makes his escape. Occasionally this doesn’t go to plan and the rider is either gored or trampled.

The next day we’re up bright and early, more than a little excited about the prospect of our first visit to Yellowstone National Park. With all due respect to Cody and its many attractions, the reason we’re here is for its proximity to the park, 53 miles to the west. While some might wonder where else in the world a round trip in excess of 100 miles would be considered convenient, much of the drive is through a spectacularly rugged canyon carved from volcanic rock by the Shoshone River. Theodore Roosevelt called it “the most scenic 50 miles in the U.S.,” and while this is possibly a claim too far, it’s certainly a drive with few equals.

As for Yellowstone itself, well … I hesitate to use absolutes – you never know what you’ll come across tomorrow – but my immediate impression was that this was the most achingly beautiful place I’d ever seen, and nothing I’ve seen since has given me cause to think differently.

From the flower-filled meadows (where a coyote poses for pictures), through the lush green forests that fill in the spaces left by fires in 2003, to the almost unnatural blue of Yellowstone Lake, this is a place where there are no dull bits to endure between each natural jewel. Everything about it is magical.

On the first day, we marvel at the beauty of the iridescent hydrothermal pools of West Thumb Geyser Basin and join the crowds to ooh and aah as Old Faithful does its stuff. On the second day, we visit the Grand Canyon of the Yellowstone with its spectacular Upper and Lower Falls, watch a herd of buffalo lazing and grazing in the meadows of Hayden Valley, and take a boardwalk trail past the bubbling mudpots of Mud Volcano. At every step of the way, there are forests, rivers, valleys and views that anywhere else would be considered world-class attractions in their own right. It really is a wonderful place.

It’s also almost inconceivably large: over 2 million acres, in fact. The roads within the park are arranged like a figure eight. Our two days of touring take us to a handful of highlights on a section of the lower loop and, in common with more than 99 percent of visitors, no more than a few hundred yards from the road.

Travel writer Tim Cahill lives 50 miles from the park and has been “puttering” around it for a quarter of a century. In his book “Lost in My Own Backyard: A Walk in Yellowstone Park,” he tells of a waterfall that remains unnamed, unmapped and therefore largely unknown within half a mile – just a few hundred yards – of Yellowstone Lake. That sections of the world’s first national park should remain virtually undiscovered in this world of GPS and Google Earth strikes me as incredible and, at the same time, hugely reassuring.

Deer, beer and sex – the Midwest