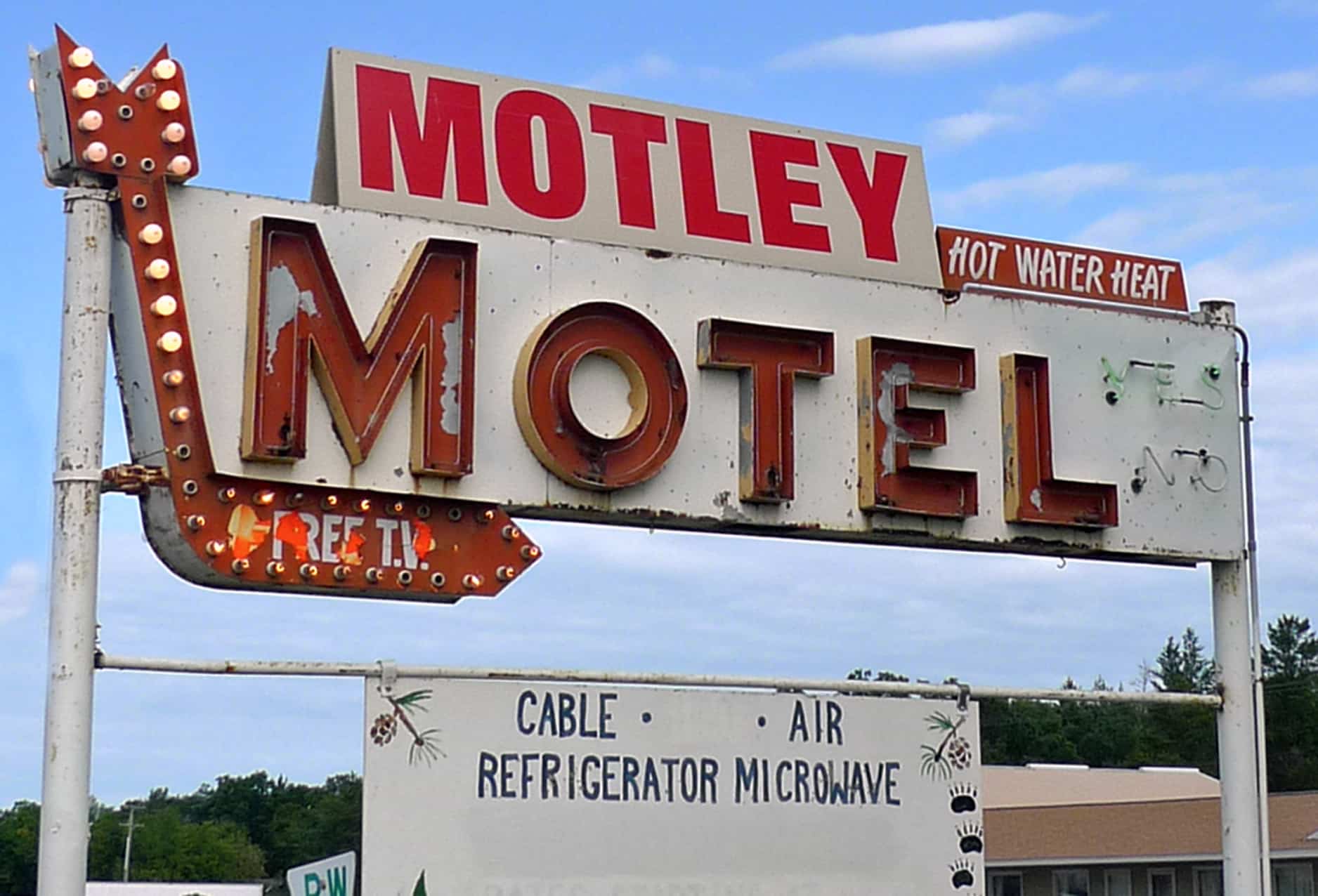 In this trip, we make our way through Wisconsin and Minnesota with the aim of getting a taste of the Midwest. Beer and baseball were always going to be on the menu; less expected were the XXX-rated adult playground and the world’s largest turkey.

Two hundred and sixty miles on Interstates 90 and 94 may have broken the back of the drive from downtown Chicago to Eau Claire, Wis., but they’ve been bland, empty miles, the motoring equivalent of visiting these parts and choosing Big Macs over beer-simmered bratwurst. A sign for U.S. Route 12 beckons us into the heart of rural Wisconsin. It’s time to start this year’s road trip for real.

A drive through northwest Wisconsin is one of endless greenery: tree-lined roads, lush meadows, dense forests and rich farmland. The roadside billboards provide an insight into most popular activities round here, with signs emphasising the comfort, portability or other relevant quality of different types of deer blind, interspersed with encouragements to drink Leinenkugel’s Beers, “The Pride of Chippewa Falls”.

These and other even less healthy questions are still turning through my mind as we reach Eau Claire and prepare ourselves for the charade that we play out on arriving at any medium-sized Midwest city.

In a supreme triumph of hope over experience, we ignore the conveniently located chain motels on the outskirts of the city and instead make our way towards the promise of a “Historic Downtown”.

This follows a set sequence. After the malls and motels, there’s the residential district with its Lutheran churches and seemingly random mix of neatly-mown lawns and furniture-strewn yards. Next, the commercial area with its real estate agents and drive-by espresso booths. Then the light industrial units and slightly seedy-looking Mexican restaurants. And finally, after crossing the railroad tracks, the four or five blocks of period buildings that the local board of trade has designated “historic”.

This area invariably boasts a department store with 1950s signage, a pharmacy with a windowful of decorative knick-knacks, an organic coffee shop with free wifi, an art deco cinema showing Harry Potter, a skateboard shop and a bikers’ bar. The other constant is that by the time you arrive, everywhere’s shut. And even if it wasn’t, there’s nowhere to stay anyway.

It’s like checking your Lotto numbers: you can’t not do it but deep down you know you’re still going to work on Monday. And sure enough, after a couple of circuits just to be sure, we retrace our steps to seek out an Americas Most Blatantly Missing Apostrophe Inn.

Room duly secured, we head off to nearby Carson Park and our main reason for visiting Eau Claire: our first ever baseball game. The fact that this is just a summer league match between the college players of Eau Claire Express and Wisconsin Woodchucks is immaterial: the sun’s shining, we’ve got cold Leinenkugel’s (one out of three ain’t bad),  and people around us are using words like base and plate and strikeout. All that’s missing is Charlie Brown on the pitcher’s mound.

The experience does nothing to alleviate my fundamental ignorance of baseball as a game, but in terms of immersing ourselves in the family atmosphere of a summer’s evening at a Midwest ballpark, it’s mission accomplished.

My other reason for wanting to visit this particular part of Wisconsin is to call into a small town 30-odd miles north of Eau Claire.

A few years ago, I’d happened upon a book called “Truck: A Love Story” by Michael Perry, a tale of everyday life in rural Wisconsin (specifically the small town of New Auburn) based around sub-plots of love, family, gardening and the rebuilding of a 1951 International Harvester truck. It’s a beautifully written, extraordinarily moving and often laugh-out-loud-funny read, and I’d been looking forward to visiting New Auburn ever since we planned this trip.

Finding Nobbern, as the locals apparently pronounce it, proves easier said than done though, as directional pointers are non-existent; it’s like1940s England when all the road signs were removed in case the Germans invaded.

Just as I’m at the point of abandoning our pilgrimage, we somehow stumble into town. It’s a little run down, with “Closed” signs in cobwebbed windows and weeds threatening to overwhelm the railroad tracks, but a growth in population (562 compared with the “Population: 485” that was the title of Perry’s first book) suggests that people are happy enough here. In other words, it’s totally unremarkable, just like any other small Midwestern town. Which I guess is probably Perry’s point.

From here we make our way north via the charming and surprisingly busy little city of Chetek (“the small town with the Big Smile”), before setting our bearings west, first on U.S. Route 8 and then, as we cross the border into Minnesota, on State Highway 95.

This is a familiar-looking landscape, reminiscent of northern France but with grain silos and water towers instead of medieval church towers. Front gardens are decorated with plastic deer; every house has vehicular heirloom out front with a “FOR SALE” sign on the windshield; and the skies are a perfect blue with light fluffy clouds.

At Princeton we head north on U.S. Route 169, along the southwestern shore of Mille Lacs Lake, “The Walleye Capital of the World”, and then west again into Brainerd. I may be doing it a disservice but this is another place where accommodation appears to be limited to serviceable but characterless chain hotels, something which makes our decision to press on past the many charming-looking hotels that look out over Mille Lacs Lake all the more frustrating.

The next day begins with breakfast next to a thoroughly unpleasant couple who look like they’ve just jumped straight out of an episode of South Park. They slurp, gulp and dribble their way through a huge pile of bright pink donuts, breaking stride only to tut disapprovingly at the lively but no-more-noisy-than-they-should-be Hispanic children on the next table.

Back on the road, we pick up U.S. Route 10 and head west. This was once one of America’s major east-west routes, running from Detroit all the way to Seattle but today reaches no further west than a few miles into North Dakota. It remains a fairly busy route and one, it’s fair to say, that some might describe as dull.

The only obvious attraction on the 130 miles from Brainerd to the North Dakota border is Big Tom, a 20 ft turkey (The World’s Largest, it probably goes without saying) built to highlight the fact that the town of Frazee is the turkey capital of the world. However, get a whiff of the nearby farms when the wind’s in certain direction and it’s not an attraction you’ll want to linger at for long.

For all its lack of inspiring scenery or great local museums (of which there may be some – we just didn’t see any), U.S. Route 10 is a fine example of road tripping being as much in the mind as it is on the road.

For us, the sight of a small town advertising its presence by emblazoning its name on a concrete water tower is as American as any chrome-trimmed diner or red-rock butte. Similarly, there’s something truly uplifting in watching guarded politeness melt first into surprise and then into smiling welcome as we explain to a bank teller or a waitress that driving through towns like this is why we do these trips, not just a step along the way to somewhere more interesting.

A local driving across this region could be forgiven for not even noticing the motels advertising the availability of Hot Water as if this was something special, or failing to experience a twinge of excitement on seeing an Airstream trailer glistening in the distance. For us though, these are the very things that make America different.

Wyoming: Across the Cowboy State to Yellowstone