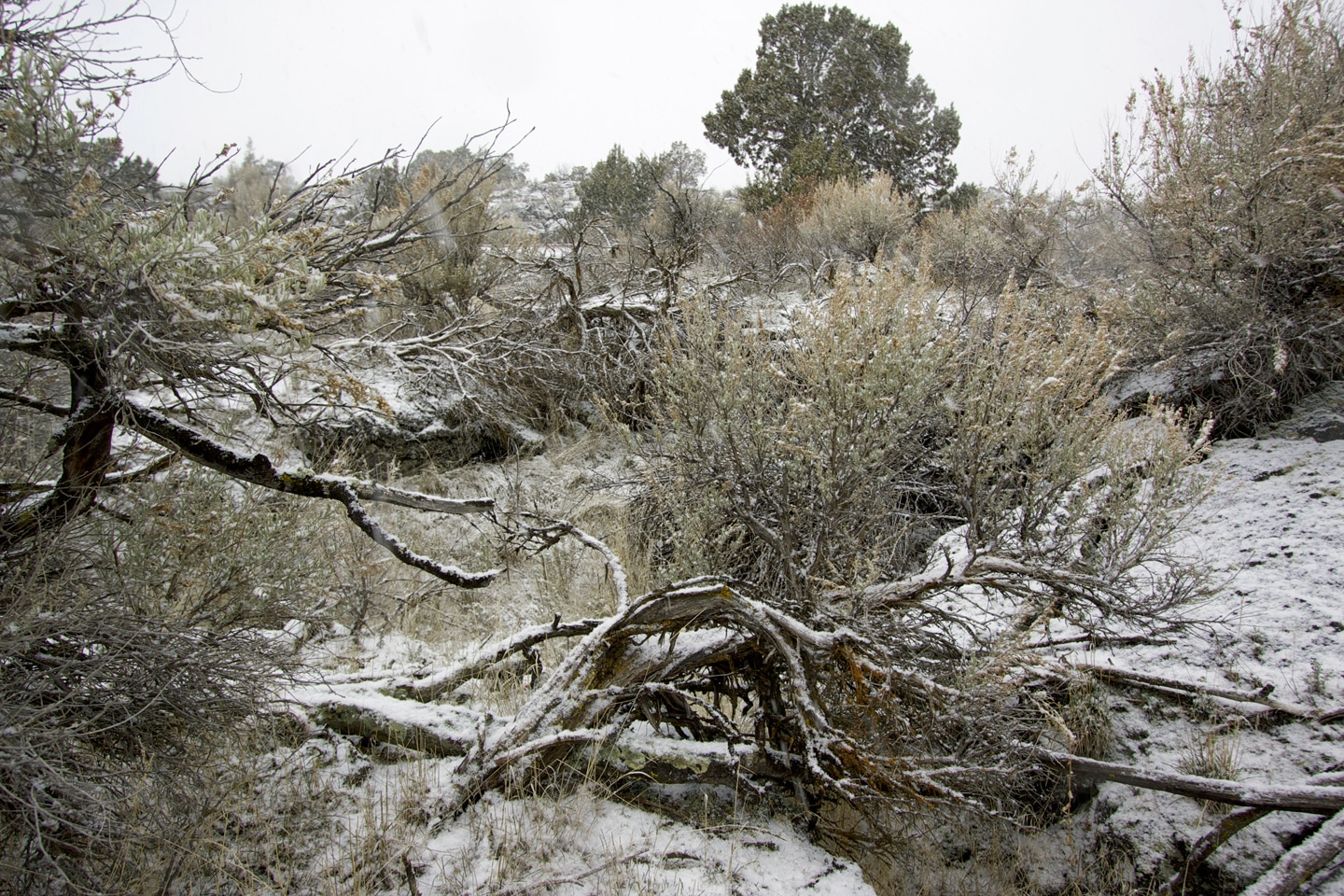 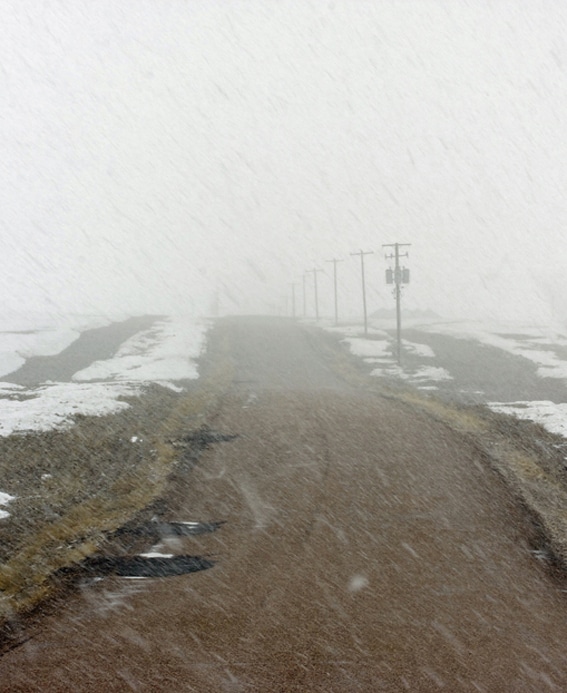 We awake to another beautiful day, a golden light rising up over the mountains to the east. Fifteen minutes later – the time it takes to pack and throw down the scalding awfulness that is hotel room coffee – and the previously expansive scene has been swallowed up in the white noise of a blizzard. And this pretty much sets the scene for the rest of the day.

From the moment we depart Idaho Falls, noses close to the windshield as we peer into the driving snow, to all but the final leg into Salt Lake, a significant chunk of the last day of our Rocky Mountain winter adventure is spent in the grey light of low skies and driving snow.

Not that we have far to go to our first stopping point. Twenty miles southwest on Interstate 15 and we pull over to explore Hell’s Half Acre, a huge lava field the Bureau of Land Management describes as a ‘Hawaiian Landscape in Idaho”.

The wintry weather means we have the place to ourselves, and this only serves to heighten the rugged, primitive feel of the place. We’re in the midst of hundreds of square miles of solidified lava thrown up through the earth’s crust four thousand years ago, a cracked, fissured and inhospitable-looking landscape that, incredibly, supports a huge variety of flora and fauna, from ferns, grasses and wildflowers to deer, antelope, bobcats and more.

Today though, the only sign of life beyond the ancient junipers and snow-covered Prickly Pear is the reassuringly familiar shape of our own footprints in the snow as we complete a short loop of the BLM trail system.

Destination #2 is another reminder of the immense geothermal forces that bubble away beneath the surface of this entire region, emerging here and there in the form of geysers, lava fields or – in this case – hot springs.

The first people to use Lava Hot Springs were migrating Bannock and Shoshone Indians who would stop to bathe and give thanks for ‘Poha-Ba’, Land of Healing Waters.

In the early 19th century, they were joined by trappers who’d recently discovered what the Indians had known for centuries: that the region was “a haven for fur bearing creatures such as beaver, wolf, fox, martin, badger, and bear.” Among the first to put down roots was mountain man Bob Dempsey, who married the local chief’s daughter Margaret, Sacagawea’s great niece, and set up a trading post. For a while the place was actually known as Dempsey but in 1915 the community adopted the more commercially aware, marketing friendly name of Lava Hot Springs.

And in next to no time the railroad had arrived, then the visitors, the hotels and the saloons. And not much has changed since.

Actually that’s not strictly true. The first sight that greets anyone arriving in town today is the Olympic Swimming Complex, an outdoor water park consisting of bright fiberglass ‘hydrotubes’ and ‘superslides’ that disgorge riders (sliders?) into the water at around 40 mph.

Once you drive under the slides though – yes, they really are that big – it’s everything you’d expect of a 100 year old spa resort. There are hotels, inns and B&Bs offering private pools, soaking tubs and therapeutic massage. Some date back to the town’s earliest days and are well preserved, others are of a younger vintage and, from the outside at least, appear less well cared for. On Main Street there’s a lounge bar, a busy café/diner and a few restaurants. There are stores selling arts & crafts, jewellery & gifts, and beads & moccasins. And there are the hot springs themselves.

We arrive unsure of whether it’s worth the effort of getting changed just to sit in a pool of hot water for half an hour, but the women in the fabulous South Bannock County Historical Museum insist: “Oh, you must, it’s unmissable, you’ll feel wonderful afterwards.” So we go, it is, and we do.

There are five pools rising in temperature from 102° F to 112° F. All but the first have gravel bottoms, giving the impression – underfoot at least – of being somewhere completely natural. And best of all, the snow is now falling in huge gentle flakes that settle on us like down from a burst pillow, leading to a wonderfully confused state of mind in which the brain says you should be shivering but the body’s cocooned in the snug warmth of the waters and blanket of steam that sits over each pool.

It’s a truly wonderful experience and one that leaves us, just as the museum ladies promised it would, feeling invigorated for hours afterwards. Which is a good job really, for Lava Hot Springs proves to be the last really memorable stop on our trip.

We attempt to delay reaching the end by taking the slow route south on Idaho 34, the Pioneer Historic Byway (so called as it follows the route taken by many of the region’s earliest settlers), but with snow flurries reducing visibility to less than 100 yards in places, much of the scenery is lost on us.

Here and there the ghostly silhouettes of abandoned homesteads loom up through the whiteness, the blizzard conditions providing a blunt reminder of just how tough life must have been for these early pioneers. We take a short diversion west from the tiny city of Grace to visit the Black Canyon of the Bear, a striking river gorge with 100-ft high black lava cliffs. And every now and again clouds of steam betray the existence of a natural hot spring just by the side of the road.

But in no time at all we reach the southern end of Idaho 34, join the traffic plowing its way through the slush and snow on the busier US Route 91, before finally being ejected, like riders on Lava Hot Springs’ superslides, into the harsh reality of Interstate 15. And that, essentially, is that. A couple of hours more and we’re dropping off the rental and heading to our airport hotel. And the next day is soaked up by the interminable trip back to England. Flights are delayed, airline desk crew are disinterested, and we descend into Manchester International Airport in a daze of exhaustion, jet-lag and post-holiday blues.

Of course, within a week or so, the horrors of multi-stop transatlantic travel are a rapidly fading memory, while the shared experiences and emotions of our seven or eight days on the road grow more vivid each day. It’s another American road trip under our belts, one different to previous trips in many ways but identical in one.

We’d set out with a number of objectives: to see a wolf in the wild, to go snowmobiling, and to wallow in a winter hot spring. The fact that we achieved just two of the three isn’t the point.

These must-sees, must-dos and must-visits can only ever be pegs on which to hang a trip. It’s the bits in between that create the richness of the experience.

The knowledge that, however carefully you plan things, there will always be hiccups along the way is what lifts what would otherwise be just a 10 day fly-drive touring vacation into what feels like, dare I say, an adventure.

It’s a word I hesitate to use. People do die on road trips but generally speaking you have to be stupid, foolhardy or unlucky to come a cropper.

There will always be satnav lemmings who blindly follow in the tire tracks of Thelma and Louise, and the Darwin Award contenders who try to balance on the edge of a Yosemite waterfall or pose for a selfie next to a Yellowstone buffalo. And, yes, there are occasionally tragic incidents where people fail to prepare for the possibility of a break down in the middle of nowhere.

But contrary to what many otherwise entirely sane people here in the UK may believe, visiting the parts of America that aren’t New York, Florida or California doesn’t mean having to choose between Deliverance, Natural Born Killers and No Country For Old Men.

And yet to us it does still feel like an adventure, albeit one for the risk averse; tales of the unexpected for people who enjoy the uncertainty of not knowing where they’ll spend the night, but are confident in the knowledge that the plastic in the pocket means it’ll almost certainly be somewhere with a halfway decent bed.

It’s not for everyone, but it works for us.