Day 7 Coyotes on a Carcass 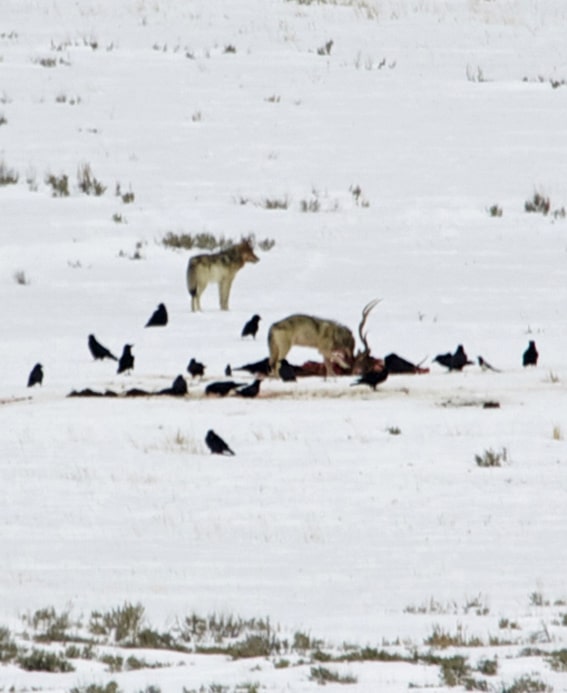 We re-enter Lamar Valley in state of semi-euphoria, pulling out the binoculars at every turnout in the full expectation of seeing more action. However, with the exception of the occasional hardy bison grazing on the long dead winter grass, Yellowstone’s wildlife has quite sensibly decided to sit out today’s snow in whatever natural shelter can be found.

We take maybe an hour to cover the 25 miles to tonight’s planned destination, Cooke City (literally the end of the road: beyond Cooke City is the beautiful Beartooth Highway, closed until late Spring), immersing ourselves in Yellowstone’s winter bleakness.

The low skies sap all colour out of the landscape; were it not for the sepia tones of the sparse steppe shrubbery it would be like traveling through our own private black and white movie. It’s the kind of drive I could do all day, wonderfully monotonous in the literal sense, and almost hypnotic as the road winds its way past slate grey streams, through sudden banks of mist and between dark walls of trees straight out of a Tim Burton set.

Finally we reach the end of the world’s most beautiful cul-de-sac and there’s a real sense of isolation about the place. Many of Cooke City’s stores and private homes are boarded up for winter and those properties that are open – the hotels and winter sports outfitters – are deserted as everyone is out on the snow. A couple of snowmobilers wave at us as they head into the woods but there’s not another soul in sight. We drive up and down the main street a couple of times wondering where to stay and what to do with the rest of the day – it’s only mid-afternoon – when Carole admits to not feeling 100 per cent. “Are we higher than before?” she asks.

Well yes we are actually. Cooke City sits at an elevation of 7608 feet, well over 2000 feet higher than Gardiner at the Northwest Entrance and certainly enough to explain Carole’s headache, tiredness and slight nausea. She’s experienced altitude sickness before and it’s far from pleasant. And that means the decision is made for us. Instead of overnighting in Cooke City and taking an early morning drive west through the park, we recline her seat as far as it will go and head back towards Gardiner. It’s a blow to be missing out on a dawn drive through the Lamar Valley but there’s no option.

For the next half hour she dozes and I once again switch off and allow Yellowstone’s majestic grandeur to roll over me. The low clouds have lifted a little, opening up longer views across Soda Butte Canyon towards the Absaroka range. There’s colour and depth to the landscape too, the oranges, reds and golds of the vegetation reflecting in the chill waters of Soda Butte Creek, and the distant trees now a deep, dark olive green.

And then, in the distance, Yellowstone’s wildlife plays its ace. Half a dozen or so vehicles have pulled up in the turnout ahead so we stop and scan the valley to see what’s causing the excitement.

“Over there, near the trees,” offers a helpful guy in a pick-up. “It’s the Lamar Valley pack. There’s been a kill.” A shiver of excitement runs through me and, sure enough, I eventually focus in on two wolves neck deep in the carcass of an elk. No fuzzy canine shapes blurred by the snow here. They may be distant but they’re clearly wolves, heads bloody from feeding and their tempers short as they snap at the ravens strutting around the periphery, risking the occasional guerilla raid on the carcass.

It’s a scene we’ve all seen a dozen times on the Discovery channel or one of David Attenborough’s epic wildlife documentaries, but to see it actually taking place in front of us is a different matter. There are no highlights, no close-ups, and no commentary, just raw nature in real time. I find it so enthralling, so powerful, so exciting that it’s a while before I even think of setting up the camera.

Again, I’m in a minority of one in attempting to grab a few grainy shots of this far away scene. It’s a different crowd from earlier, still mainly spotter-scopers (although none that I recognize) but also a smattering of less-obviously obsessive folks, people like us, our friend in the pick-up and one or two others who look they might be able to hold a conversation in a bar.

There’s a handful of people trying to get a better view from the slightly loftier perspective of the hill behind us including, I’m told, wildlife cinematographer and conservationist Bob Landis. And off to the left, slightly away from the main group, is a woman who every now and again cups her hands, howls at the pack and cries out with the voice of a desperate lover: “I love you Butterface.” And yes, I’ve googled it: Butterface is a wolf.

As we stand and watch, the guy in the pick-up tells me the story of the pack’s recent history, an epic tale of tragedy centered around the killing of wolf 832F three months earlier.

This particular wolf, instantly recognisable (by those in the know) for her rich gray coat and renowned for her hunting skills, was the alpha female of the Lamar Valley pack and much loved by those who follow the region’s wildlife. (Some say she was the world’s most famous wolf.) Her killing, and that of her ‘brother-in-law’, beta male 754M – both shot perfectly legally, during the hunting season and outside the park – has left the pack structure in disarray.

Having lost his partner with whom he’d fathered three litters, alpha male 755M left the pack in search of a new mate, returning in February accompanied by a gray female from another pack. However, instead of rejoicing at their father’s happiness and welcoming their new stepmom with open arms, the females of the pack chased her down and killed her, forcing 755M to leave in search of his third mate in as many months.

He still hasn’t returned and the pack is now in something of a state of flux, his daughters having attracted new males from the Hoodoo pack, outside the park. Whether 755M will ever be able to return, let alone regain his alpha status, remains to be seen at the time of writing.

It’s all nature of course and it’s wrong to anthropomorphise the relationships within the pack, but you’ve gotta feel for the guy: wife and brother shot dead, new bride murdered by the kids, daughters hanging with a bad crowd. At least he no longer has to put up with the lunatic Butterface woman.

As we continue to watch the wolves on the carcass, alternating between camera, binoculars and pick-up guy’s spotter scope, a murmur of excitement begins to rise among our fellow watchers. Over to the left, a couple of hundred yards away from the main event, other members of the pack are beginning to stir as they recover from a meat overload-induced slumber. Some stretch, other howl, and within minutes there are seven or eight of them on the move, clearly a state of excitement.

And the focus of their attention is the pair of opportunist coyotes who’ve been taking advantage of their sleep to feast on the kill for the last 20 minutes or so. Yep, we suddenly learn that that we’ve completely misread the scene in front of us. However, any momentary embarrassment gives way to the rush of adrenalin as we watch the Lamar Valley wolves bear down on the interlopers.

For the coyotes’ part, they’re either very brave, very hungry, or very confident in their ability to outrun the wolves, as they leave it to the last moment to make their exit, scampering away only as far as is necessary to avoid a terminal ticking off for their nerve.

I stand and savour the moment for a little while longer, reluctant to leave but aware that (1) we have yet to find a hotel and (2) this isn’t actually curing Carole’s altitude sickness. Finally, I thank pick-up guy for the use of his scope, and hand over responsibility for monitoring Yellowstone’s wolves to those with the ability to distinguish Canis lupus from Canis latrans.