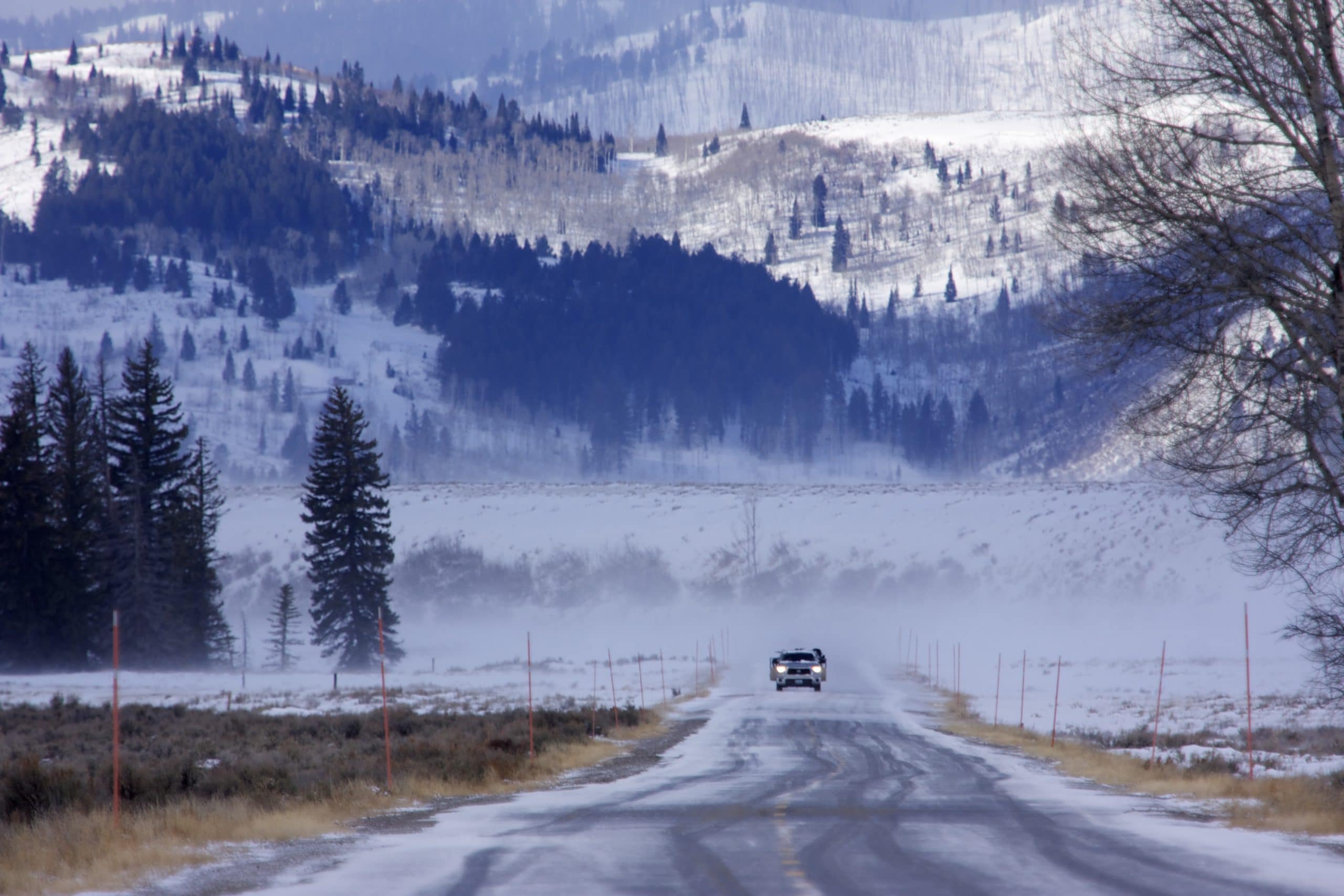 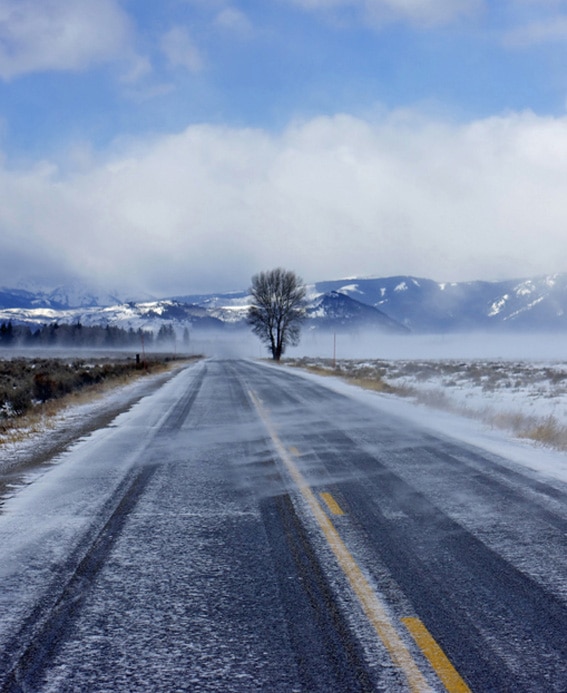 From the moment I throw open the curtains, it’s clear that today’s going to be very different. There’s been snow overnight, the peaks are lost behind low clouds and it’s noticeably colder, so cold in fact that there’s rough, pitted ice beneath the two or three inches of white stuff that’s settled on the car.

As we hit the road, the wind begins to pick up, drifting the snow to and fro across the road like marine flora wafting in the ebb and flow of the tide. It makes for a spectacular drive – particularly the side trip to look for moose along the road to Gros Ventre and Kelly (two females spotted) – but as the minutes tick by, it becomes apparent that the horizontal blizzard is made up of more than just last night’s accumulated fall.

By the time we reach Jackson (heading north means heading back south first – the direct road into Yellowstone is closed in winter), it’s coming down hard and fast and we decide to stop for breakfast and consider our route with, hopefully, the benefit of some local knowledge.

It’s Sunday morning so there aren’t too many places open but we chance upon a small café on a side street, and it’s clearly the place to be. It’s loud, lively and very busy, with a couple guys on bodhrán and banjo playing shanty tunes and drinking songs to celebrate that most American of cultural holidays, St Patrick’s Day. There’s one spare table so we settle in, order coffee and eggs, and dig out the road map. Sure enough, the sight of two lost souls is all it takes for someone to offer their advice. “Which way are you headed? Teton Pass? They do their best to keep it open so you should be okay. You got an SUV? You’ll be fine.”

And so it proves. There are moments of hesitation as we head out of Jackson and pass signs warning of poor conditions ahead, and feelings of apprehension – are we about to reach a Road Closed sign? – when there’s no traffic in the opposite direction for a minute or two, but overall it’s an exhilarating drive, one that combines the all too rare experiences of (1) doing something that involves even the remotest degree of risk, and (2) employing 4WD in conditions where it’s actually warranted.

Indeed it’s with a sense of pleasure prematurely terminated that we descend from the clouds into the relative safety and civilization of the City of Victor, Idaho and pull up at the only traffic lights in town … only to slide helplessly along the ice before coming to an inglorious halt in the deep, ploughed snow. Suitably reminded of the conditions, we set off again and follow Idaho Highway 33 across the flat, empty, snow-blanketed landscape of northeast Idaho.

The scenery barely changes as we join US Route 20 and head north across wide-open prairie and past the region’s renowned potato farms, with their traditional low-profile storage cellars. These half-barn, half-cellar, Toblerone-shaped buildings are dug into the ground to take advantage of the soil’s natural insulating properties. The roof is then covered in sod or straw bales and, as the years go by, the surrounding grasses start to cover the entire building. It’s not something I’d seen mentioned in any guidebooks but these buildings are as individual and distinctive a form of American architecture as covered bridges and prefabricated stainless steel diners.

As we pass Ashton – self-proclaimed ‘Seed Potato Capital of the World’ – the scenery suddenly changes: the road starts to climb, the wide open views give way to the trees of Targhee National Forest and the snow begins to get deeper. And in every opening in the forest, along every trail and across every valley floor, there are the distinctive ski-and-caterpillar tracks of the snowmobile.

This is snowmobiling country and today’s destination, West Yellowstone, is held to be the snowmobiling capital of the world. It’s what people do around here and it’s something I’ve been looking forward to since we planned the trip.

We’d realized a few weeks earlier that the timing of our spur-of-the-moment trip meant we’d miss Yellowstone’s snowmobiling season: the three month period during which the park service allows a number of authorized operators to run trips into the park ended between our landing at SLC and our arrival in Montana. No problem, I reasoned, there will be equally beautiful routes to explore outside Yellowstone itself.

The first inkling that things might not work out quite as planned comes as we arrive in the Snowmobiling Capital of the World.

Instead of the bustling streets, busy bars and buzzing engines I’d expected, the scene is more reminiscent of an out of season seaside town. With the sound-deadening addition of snow. The streets are all but deserted; many of the hotels and restaurants are hidden behind 6-ft deep walls of ploughed snow; even the t-shirt and novelty gift stores are boarded up.

We pull up outside our pre-booked hotel (we’d had that much foresight), check in and ask about the possibility of renting skimobiles tomorrow so we can follow the highly recommended trail to Two Top Mountain. “All depends on the weather, but there’s not much snow on the ground. Check back first thing and we’ll let you know.”

Accepting that there’s not much more we can do except hope for overnight snow, we head out to find somewhere to eat.

It is a very odd sensation to have an entire street to yourself but it really is that empty. There are one or two souvenir stores still open, but they’re focused more on restocking for the summer season than any real hope of sales. An occasional pick-up trundles by and every now and then we catch a glimpse of someone going about their business on a snowmobile, but overall there’s a sense that this is somewhere ready to take a break from its visitors.

Even the bar staff at the Wild West Pizzeria and Saloon seem mildly and, it must be said, pleasantly surprised at having out-of-towners to serve. And for our part, we’re equally pleasantly surprised by the warmth of their welcome and the fact that, by the time we leave, the atmosphere has benefitted from the presence of as many as ten other drinkers and diners. This is clearly the place to be on St Paddy’s Day!