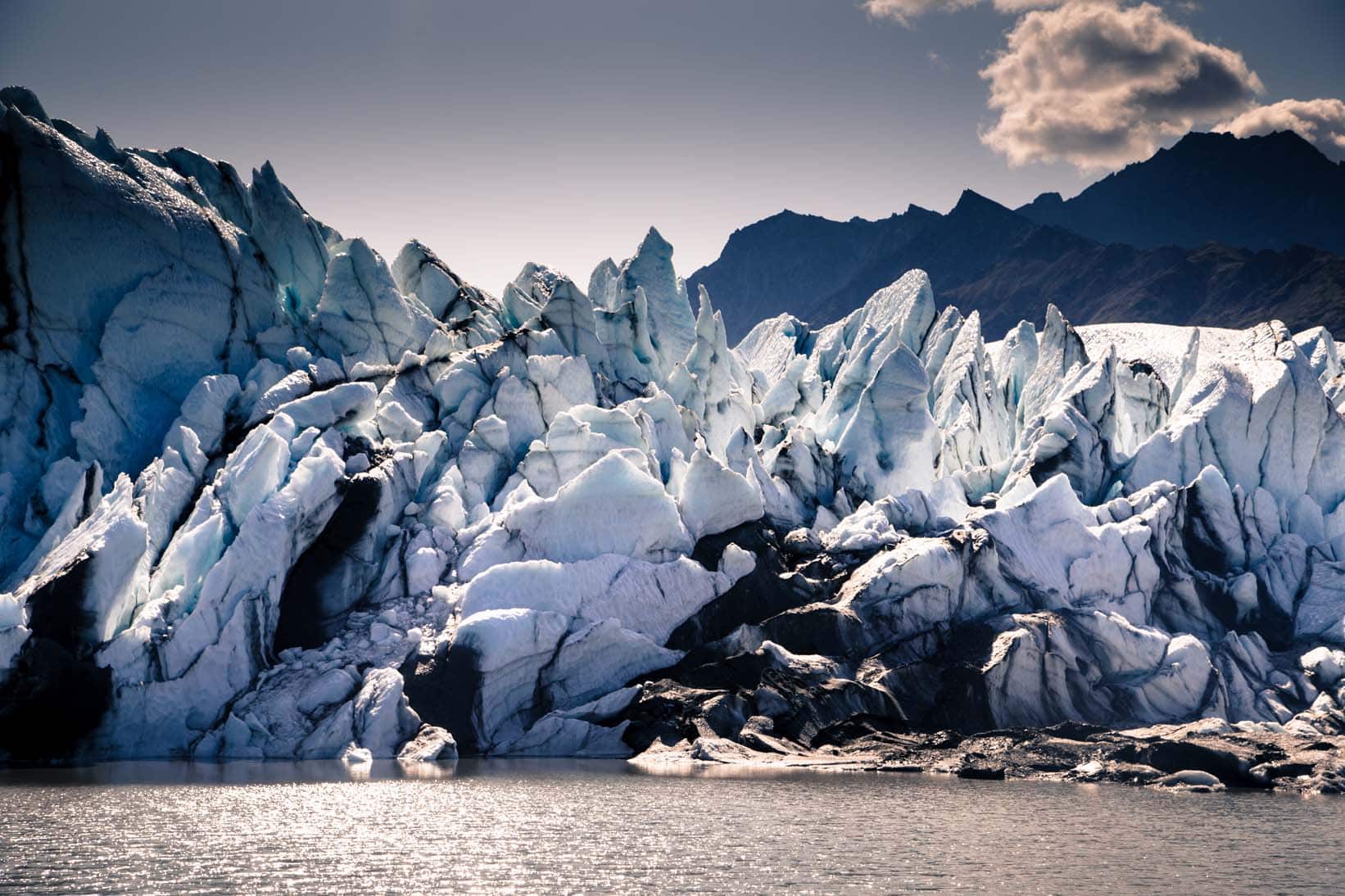 To Grand View Café next door for breakfast then back west a few miles to pick up our guided tour of Matanuska Glacier with Nova Alaska Guides. The glacier is only accessible via a private road so there’s a fee to enter and – unless you really know what you’re doing and have the necessary gear – you’ll need to book a trip with one the number of outfits who can take you out there safely.

The glacier itself is 26 miles long and 4 miles wide – the largest in Alaska that can be reached by vehicle – so a two hour guided trip can only show you a tiny fraction of that but it’s a remarkable experience. You’re guided past crevices, between ice walls and down slopes that would have you horizontal in seconds were it not for the spikes attached to your boots. And despite the fact that there are other groups exploring the same miniscule fraction of the overall glacier, the sheer scale of the place means you may only catch occasional glimpses of them. It’s a photographer’s paradise of course but should be a must-do on any visitor’s itinerary: Alaska Magazine rates it as #2 in its ’49 Places To Visit In The 49th State’.

Heading to tonight’s destination, Talkeetna, requires us to retrace our steps west along the Glenn Highway to Palmer – no great hardship – then head through Wasilla and north on the Parks Highway. I’d assumed that this 323 mile road took its name from the fact that it runs past Denali National and State Parks (yes, they are two different things) but it’s actually named after one George Parks, governor of the Territory of Alaska from 1925 to 1933. However, according to that font of all knowledge Wikipedia, the aptness of the name was not lost on those who chose it.

It almost goes without saying that it’s a beautiful drive. Slightly less expected is the continuing pleasant weather of sunshine and blue skies. The only cloud on the horizon – literally and metaphorically – is concern over conditions in and around Denali, where weeks of heavy rain have resulted landslides, causing the park service to close public access beyond mile 30. We’re booked onto a bus that’s scheduled to take us the full 92 miles into the park in three days’ time.

Talkeetna itself is a real highlight of our trip. It has the air of a rugged and outdoorsy place – the bars and cafes are full of people (servers and customers alike) dressed for a life of climbing, kayaking, off-road biking, that kind of thing – but it’s equally geared up to meeting the needs of those planning less challenging adventures, with a excellent range of restaurants, brew pubs, delis, coffee shops and other such essentials.

Our room – overlooking main street, directly above the Wildflower Café – is disappointing: the TV and Wi-Fi both fail to work throughout our stay (yes, I know we’re in Alaska and should have better things to do with our time but you know, when it’s advertised…); Carole never trusts the cleanliness of dark coloured towels or bedding; the shower is mouldy; and the freezer is frosted shut. But we stroll down Main Street for a couple of beers at the brilliant West Rib Pub & Grill then back to the Wildflower Café for an even more impressive selection of beers, some excellent wine, and a superb meal of sesame scallops followed by halibut and fries. We love it here.