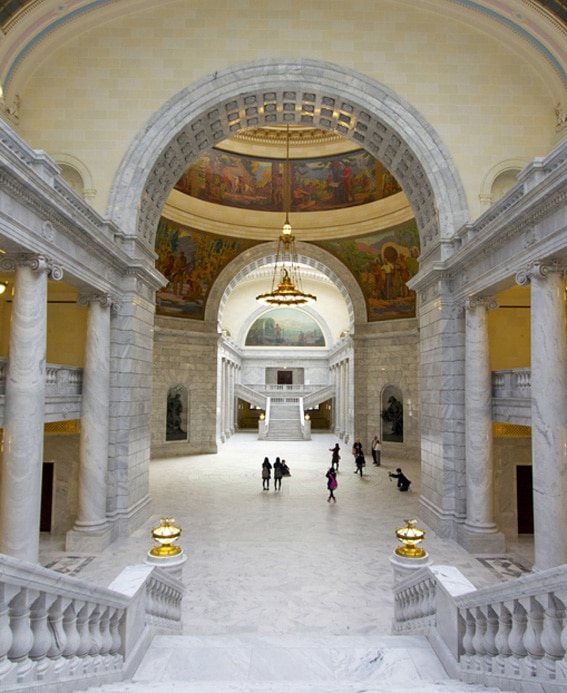 There are few things more exhilarating than waking up in a new city where the only demand on your time is to explore a little. Our hotel, the hundred-year old Peery (highly recommended) is right in the heart of the city and with the sun warming the sidewalks we make our way up Main Street. Architecture is a mix of characterful 10, 12, 14-story buildings from the early part of the last century and taller, somewhat less inspired concrete towers of a more recent vintage.

Three blocks north and we’re at #1 destination, Temple Square. This is where, in 1847, Brigham Young – the 2nd President of The Church of Jesus Christ of Latter-day Saints – determined that the extraordinary six-spired, gothic-styled Salt Lake Temple should be built. Work began in 1853 and just 40 years later, it opened for business. Just? Well yes, just.

Pay a visit to the South Visitors’ Center and there’s a series of excellent exhibits explaining how each of the thousands of granite blocks used in the construction of the 170-room temple was cut by hand, hauled by oxen from a quarry 20 miles away, then lifted into place by pioneers donating their time and skills.

The centre is also home to a cutaway scale model of the temple, giving non-adherents (who are not allowed in the temple itself) the opportunity to have a look around, albeit in the form of an 88-inch tall dolls’ house.

The staff/guides are, without exception, young, attractive and disarmingly charming. I had walked in with my guard up against the expected proselytising, and instead find the Elders and Sisters to be polite, friendly and open. One girl does ask us about our beliefs but graciously allows me to close that particular door as gently as it is opened. Give me the honest sales spiel of an LDS missionary anytime over the surreptitiously palmed propaganda of the Jesus pamphleteers who haunt the National Parks.

From here we head up the hill through a quiet, leafy residential district, to the State Capitol. Its design follows the standard principles – broad steps, Corinthian columns and statement dome – but there’s something special about this building that leaves a lasting impression.

To begin with, there’s its exceptional situation, high up on Capitol Hill. Walk to the top of the steps, turn around and the views, not only of the city below but of the mountains beyond, are spectacular.

Enter through the magnificent, south-facing front entrance and the interior is no less impressive, with its fairy tale staircases, historic murals, thrusting marble columns and 165-ft high atrium. The building underwent a $240 million renovation between 2004 and 2008, with three objectives: the restoration of architecture and decoration to its original glory; the enhancement of its ability to withstand earthquakes; and the addition of features that had been left on the drawing board back in 1916 due to budget constraints.

It’s hard to imagine that anyone would visit Salt Lake and not make the effort to see the Capitol but it really is a must-see.

OK, time to hit the road and we’re almost immediately subjected to what is probably the most unlikely of Utahan experiences: a less-than-scenic drive. Follow I-15 north out of Salt Lake and it’s almost a relief when the ugliness of the city’s oil refineries and mining operations gives way to the seemingly endless sprawl of its dormitory towns.

Car dealerships, small business units and industrial parks cling to either side of the freeway. Retail malls, hotels, gas stations and all the usual food outlets vie for attention at the major intersections. And beyond sit identikit residential areas, many no doubt highly desirable and priced accordingly.

It’s easy to be hypocritical about these things: a dash around Wal-Mart sets us up with provisions for the next few days; our rental needs gas just like everybody else’s; and many’s the time we’ve sought the comfort and familiarity of a budget chain motel. But you do just wonder what Brigham Young’s followers would make of today’s Bountiful, the valley location a few miles north of Salt Lake that they choose as their second settlement.

Our plan had been to put miles under the belt today but we soon decide to choose quality over quantity and pick up one of the west’s most beautiful drives, US Route 89. This incredibly scenic highway runs from the Mexican border all the way up to Canada. Along the way it passes by or near the National Parks of Saguaro, Grand Canyon, Zion, Bryce Canyon, Grand Teton, Yellowstone, and Glacier. If you were looking for a single route road trip, you’d be hard pressed to find one more scenic or indeed historic than this.*

We pick it up at Brigham City, head northeast through Logan and start the 39-mile section though the Wasatch-Cache National Forest, a drive designated the Logan Canyon Scenic Byway. Climbing through the snow-covered Bear River Mountains, the road reaches the summit of Bear Pass at 7,800 feet, before descending rapidly to a completely frozen Bear Lake.

A few miles on and we cross from Utah into Bear Lake County, Idaho, and pass through a series of Mormon settlements. First of all there’s St Charles, with its memorial commemorating its most celebrated son, Mount Rushmore sculptor Gutzon Borglum. Next there’s Paris, a city of fewer than 600 people but almost 100 buildings listed in the National Register of Historic Places (a ratio that’s surely got to be unparalleled anywhere in the country). From here we pass through Ovid, with its photogenic, boarded-up LDS meeting house. And finally, as we near the Wyoming border, there’s Montpelier, once a railway town and, before that, a stopping-off point along the Oregon Trail.

These two facts define Montpelier to this day. Its big attraction is the National Oregon/California Trail Center Museum. Opening hours are limited at this time of year and it’s just closing as we arrive but we’ve been this way before and it’s a great child/family-friendly experience in which you’re encouraged to take part in a simulated pioneer trek along the Oregon Trail.

As far as the railroad’s concerned, Montpelier became a ‘division point’ on the Oregon Short Line Railroad in 1882 and remained an important terminus until the middle of the 20th century. Unsurprisingly, the disappearance of significant rail traffic resulted in the city’s decline. Enter on the railroad bridge to the west of the city and the once proud brickwork buildings stand empty and boarded up, their windows opaque through the build up of dirt. We talk to someone closely involved in Montpelier’s hospitality business (who, for the sake of her career, should probably remain anonymous) and, after a half hearted attempt to convince us of the city’s attractions, she concedes that Wyoming’s Afton, just over the border, probably holds the greater appeal in terms of lodging and dining.

Well yes, compared to Montpelier, it probably does, but only in relative terms.

Some years previously we’d driven through Afton – famous for its street-spanning ‘World’s Largest Elk Antler Arch’ (how much competition is there in that field?!) – and it had all the trappings of a thriving western town: bustling main street, plenty of bars, as many Harleys as pick-ups, boardwalk stores selling cowboy paraphernalia, even the obligatory wooden bench seats carved into the shape of grizzlies. Sadly, Afton too seems to be on its uppers. There are motels, although the city’s main hotel/restaurant, Colter’s Lodge, has closed down, and there are bars and restaurants, but choice and quality are limited.

That said, we manage to find a reasonably clean room, a friendly bar – the Outlaw Saloon – and a perfectly acceptable Mexican meal. And for a first night on the road, with no firm destination in mind, that’s as much as you can ask.

* The southernmost section of US Route 89 was actually renumbered in the 1990s so, officially, the road known as the National Park Highway doesn’t exist south of Flagstaff, AZ, but only the most pedantic would refuse to recognise this as a continuous border-to-border route.