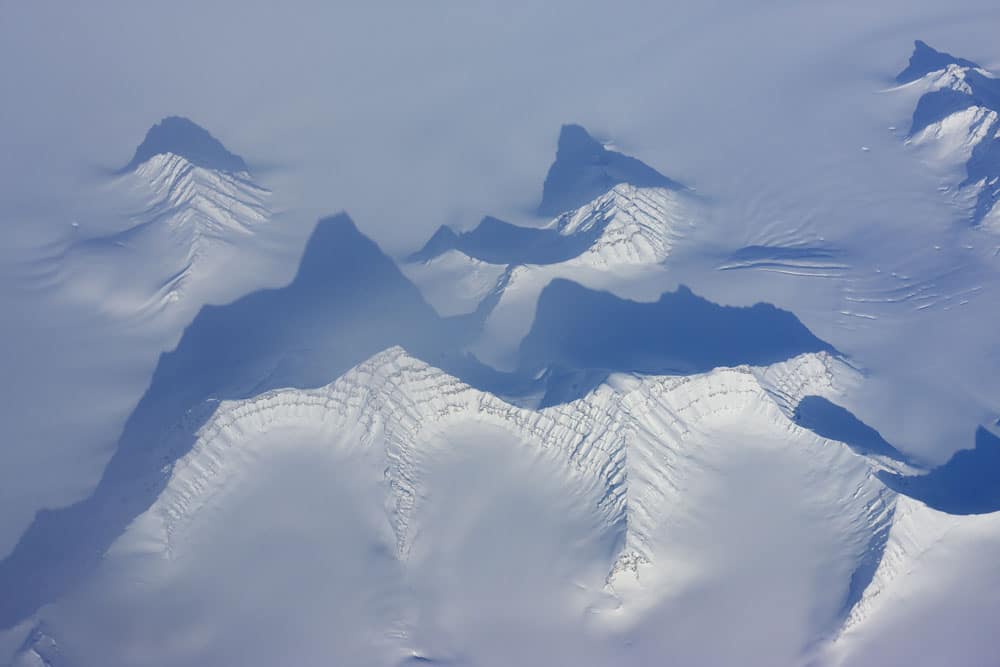 Greenland mountains from the window seat, 36,000 feet above

Some years ago we resolved never to repeat the experience of a three-leg transatlantic flight and yet here we are again, facing flights from Manchester, England to Frankfurt, Germany (yes, geographers, the wrong direction) then turning right back round again and heading for Denver, CO before making the final hop to Salt Lake City, UT.

The short jump over the North Sea proceeds without incident and even a delay for de-icing in Germany fails to dampen spirits. Okay, time for a celebratory beer, which dampens trousers instead as I immediately tip it into my lap, (meaning both of us are now sitting on wet seats, the guy in front of my wife Carole having minutes earlier reclined his seat a little over-vigorously).

Seven slightly soggy and sticky hours later we descend into Denver and make our way to the back of a very long and very slow-moving line awaiting clearance through the half dozen or so Homeland Security gates they’ve decided to open today. And despite the good humour and apologies of the officer policing the sweaty crowds (we’re dressed for winter; Denver’s sweltering in 75 degrees), our cheery first-day-of-the-trip optimism soon gives way to a resigned acceptance that there will be two empty seats on the flight to SLC.

An hour and 20 minutes later, we escape the tired, poor, huddled masses and are officially accepted into the USA. We collect our bags, hand over the forms confirming that we’re not bringing any plants into the country and, whadyaknow, are diverted for a random search to prove that we are indeed flora-free. Thirty minutes in the triffid-line and we’re cleared to make our way to the back of the missed flights-line, one that consists of another 20 equally pissed off people and takes a full hour to work through.

We’ve missed our original flight; we’ve missed the flight they’d helpfully checked us onto, and there’s only one seat available on the rebooked-rebooked flight in 90 minutes’ time. To the eternal credit of the women on the desk, they recognise that the idea of separate flights may prove to be the tipping point as far as the sanity of passenger Thody, Carole J. is concerned, and somehow magic up a second seat out of nowhere.

And having spent the best part of the previous three hours in slow shuffle mode, it’s only appropriate that it takes us another hour to get through security screening, and we end up having to do that middle-aged speed walk to the distant departure gate (you don’t actually go any faster, you just move in a way that suggests to others you’re making more of an effort).

We were originally scheduled to arrive in Salt Lake about four in the afternoon, leaving time to shower, take a walk then find somewhere to eat. Instead we pull up outside the Peery Hotel some time after 10 pm, shattered and ready to drop.

And then, not for the first time, Utah comes up trumps in the form of a brew pub.

This is a state in which the majority of the population follows a religion that strictly forbids alcohol, one that until recently prohibited bars from selling booze to anyone other than members or diners, and one in which supermarkets are still prohibited from selling anything stronger than beer. And yet wherever you go in Utah, you’re never far from a specialist brew pub or microbrewery producing individual, handcrafted beers and lagers. And here on 300 South, that place is Squatters.

It would be too neat a closing device to suggest that three pints of Squatters IPA transform the nightmare journey from hell into a distant memory, but they certainly take the edge off it.