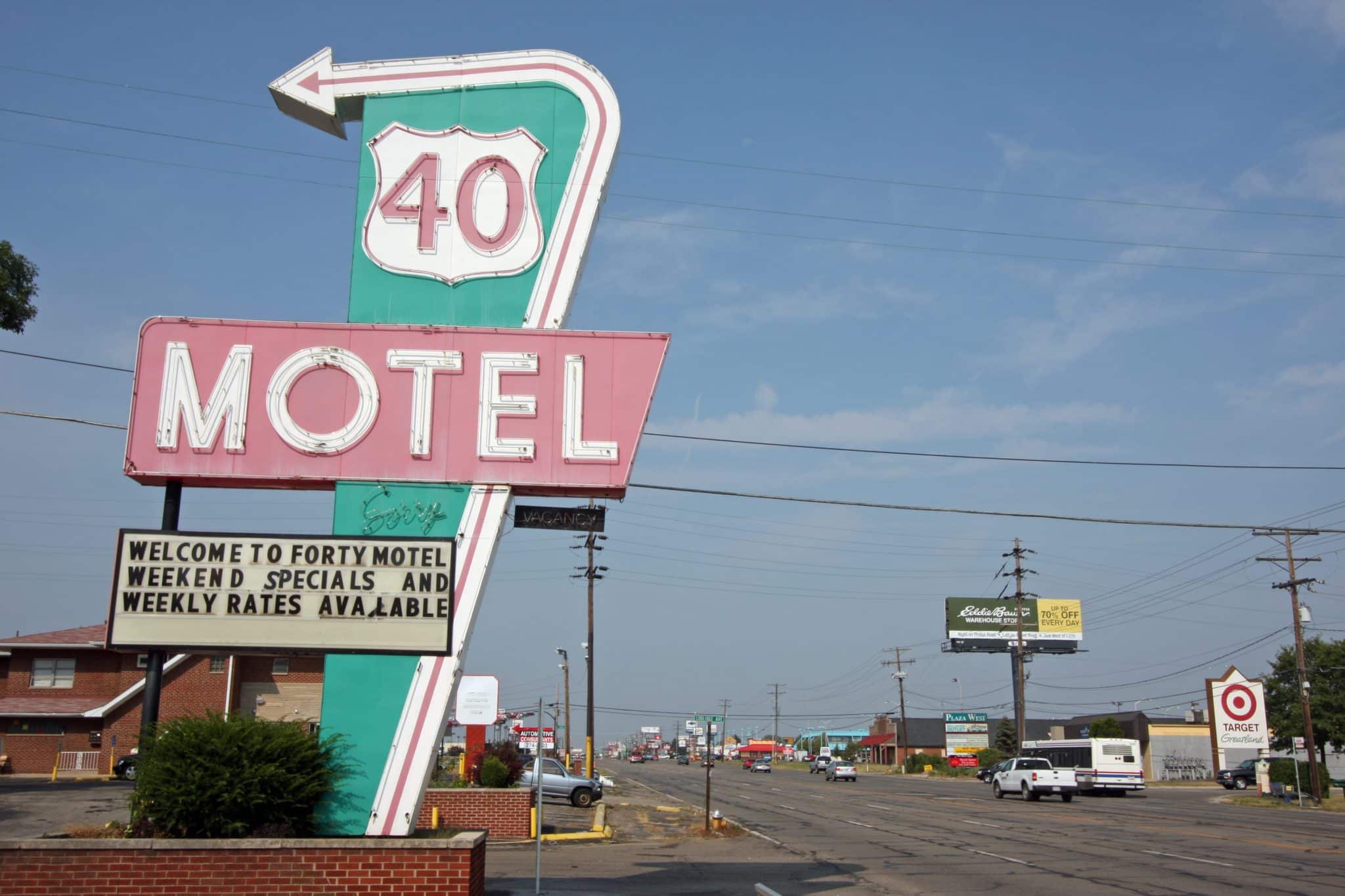 Heading east on any U.S. highway feels wrong somehow, but nowhere more so than on what, since 2002, has been designated “The Historic National Road.”

Modern America was built from east to west, and this is the road on which work began. Authorised by Congress in 1806, the nation’s first federally funded interstate highway was built to open up access to the states carved out of the old Northwest Territory: Ohio, Indiana and Illinois. Construction started in Cumberland, Md., in 1811 and the road reached its western terminus, in Vandalia, Ill., in 1839.

Today, the National Road is a designated section of U.S. Route 40. Carole and I pick it up in Indiana, in the town of Knightstown.

Historic it may be, but the section that runs through eastern Indiana provides a fairly depressing snapshot of modern America. Virtually every town we pass through has its own deserted gas station and a handful of stores with “Closed” signs just visible through unwashed windows.

Richmond, the last major city heading east, may not be dying on its feet in quite the same way, but the endless strip of motel franchises, fast food outlets, body shops, tire fitters and muffler replacement dealers still speaks volumes. The National Road once represented everything exciting and optimistic about America, but this final section in eastern Indiana, if not a corridor of complete destitution, is certainly no longer anything to be celebrated.

Then we cross the state line into Ohio. In an instant, the jungle of neon signs gives way to a landscape of red barns and cornfields and, for a few miles at least, we’re able to enjoy a road that’s become what we imagined it would be: a two-lane highway through gently rolling farmland.

The first major place we pass on our way across the Buckeye State is Dayton, the city in which Orville and Wilbur Wright invented and built the world’s first successful airplane. This feat is recognised today on every state license plate: “Ohio – Birthplace of Aviation.”

Now, my knowledge of the story of flight may be sketchy (my boyhood history lessons in England tended to concentrate on more interesting inventions like Jethro Tull’s seed drill and Hargreaves’ spinning jenny) but didn’t the first flight actually take place in Kitty Hawk, N.C.?

Well, yes, it did – North Carolina’s plates state “First in Flight” – and the two states have been arguing about it since. So determined was Ohio to lay claim to the title that in 2003, 100 years after that first flight, the question came before Congress: “Was Ohio or North Carolina the birthplace of aviation?” Somewhat surprisingly, in my view, the House voted 378-3 in favour of Ohio – and there’s no prize for guessing where the three dissenting voices came from.

The next city on the National Road is Springfield, Ohio, and, well, let’s just say that the impression it gives from the road we’re travelling is less than impressive.

Entering from the west, visitors are greeted by the sight of block after block of bulldozed homes and boarded-up properties awaiting demolition. Closer to the center, the residential desolation gives way to red brick warehouses and factories which, if not yet totally abandoned, have sunk to such a state of disrepair that the owners have long since given up repairing broken windows.

We drive straight through, leaving the city along a section of road lined by cheap food joints, auto-related discount stores and a collection of the most run-down motels I have ever seen. Cars are jacked up, men sit outside drinking, and weeds grow between the tiles in pools that can’t have seen anything more than rainwater in years.

These are places that would have Javier Bardem’s character in “No Country for Old Men” fearing for his safety, so we head straight for the nearby interstate and its promise of faceless but safe and clean chain hotels.

The next morning I get talking to a Springfield local who is genuinely taken aback by the poor impression her city has made on us (and I am certainly not insensitive enough to have expressed my full feelings). She points out that the demolition work is in preparation for a spanking new hospital, that the city boasts a renowned Frank Lloyd Wright building and that, somewhat embarrassingly, we’ve contrived to drive straight past a historic National Road inn – Pennsylvania House – the previous night.

With all this in mind, we set off determined to take a more positive outlook. Unfortunately, my insistence on sticking to the National Road means that even the state capital, Columbus, disappoints. Columbus is a city with a world-class zoo, a thriving arts scene and outstanding architecture, but our route just leads us from one run-down neighbourhood to the next, past $40-a-night motels where the facilities are so basic that one has decided that “COLOR TV” is a luxury worth shouting about.

With the protests from the shotgun seat increasing in volume and the generalisations about Ohio becoming ever more sweeping, I feel that the time has come to concede defeat and take a fresh look at the map (in hindsight a decision I should possibly have taken earlier). Perhaps a diversion south to Lancaster, birthplace of General William Tecumseh Sherman, will show us a different side of the state.

And within a matter of just a few miles, U.S. Route 33 transports us to a world of wonderfully drivable back roads, neat front gardens, picture-postcard farms and rolling, green countryside. It’s an absolute delight, as is the visit to the Sherman House Museum, the beautifully restored wooden frame home in which William Tecumseh and his 10 siblings were born and raised – and, impressively, where our guide turns out to be the descendant of one of the great general’s officers.

Lancaster is a picturesque place in its own right, so we stop for lunch. Halfway through, a complete stranger (well, he would be, wouldn’t he?) introduces himself, asks about us and our trip, and offers some tips before wishing us well. It’s things like this that can alter your impression of a whole state so, whoever you are, sir, you’re a great ambassador for the Birthplace of Aviation.

With renewed vigour, we head back north, passing by the home of another of the three great Ohio generals, Philip Sheridan (the third being Ulysses S. Grant), before rejoining Route 40 at Norwich, home, appropriately enough, to the National Road Museum.

This is actually a two-for-the-price-of-one attraction, combining a very impressive history of the National Road with an area dedicated to locally born author Zane Grey, a man described as the “Father of the Adult Western” (a title earned for his prolific output of grown-up cowboy novels, not for his place in the history of special-interest pornography).

From here to the West Virginia state line is about 60 miles and, as if making one last effort to win us over, the National Road suddenly becomes everything we’d hoped it would be. There’s the picturesque old city of Cambridge, with its historic 19th-century buildings. There are the S-bridges, a design feature unique to the National Road and developed to avoid the need to build bridges at an angle across rivers. And there’s the countryside itself, which begins its gentle climb up into the Appalachian Mountains.

It’s just a shame that, instead of leaving Ohio with this positive image in our minds, we decide to spend another night in the state, at a hotel on a hill overlooking St. Clairsville.

Within minutes of our checking in, the hotel and adjacent restaurant suffer a power cut. “Nothing to worry about,” we’re reassured. “It’ll be on again soon. You guys just have another drink.”

Two hours pass and the obscenities emanating from the dark shadows of the kitchen make it clear that we’re not the only ones to have enjoyed “just another drink.” It’s obvious that even if power were to be restored now, the staff would be incapable of preparing anything remotely edible, so Carole and I return to our room, where we eat pretzels by the light of the glow sticks that have been handed out to all guests.

Some things just weren’t meant to be, were they?