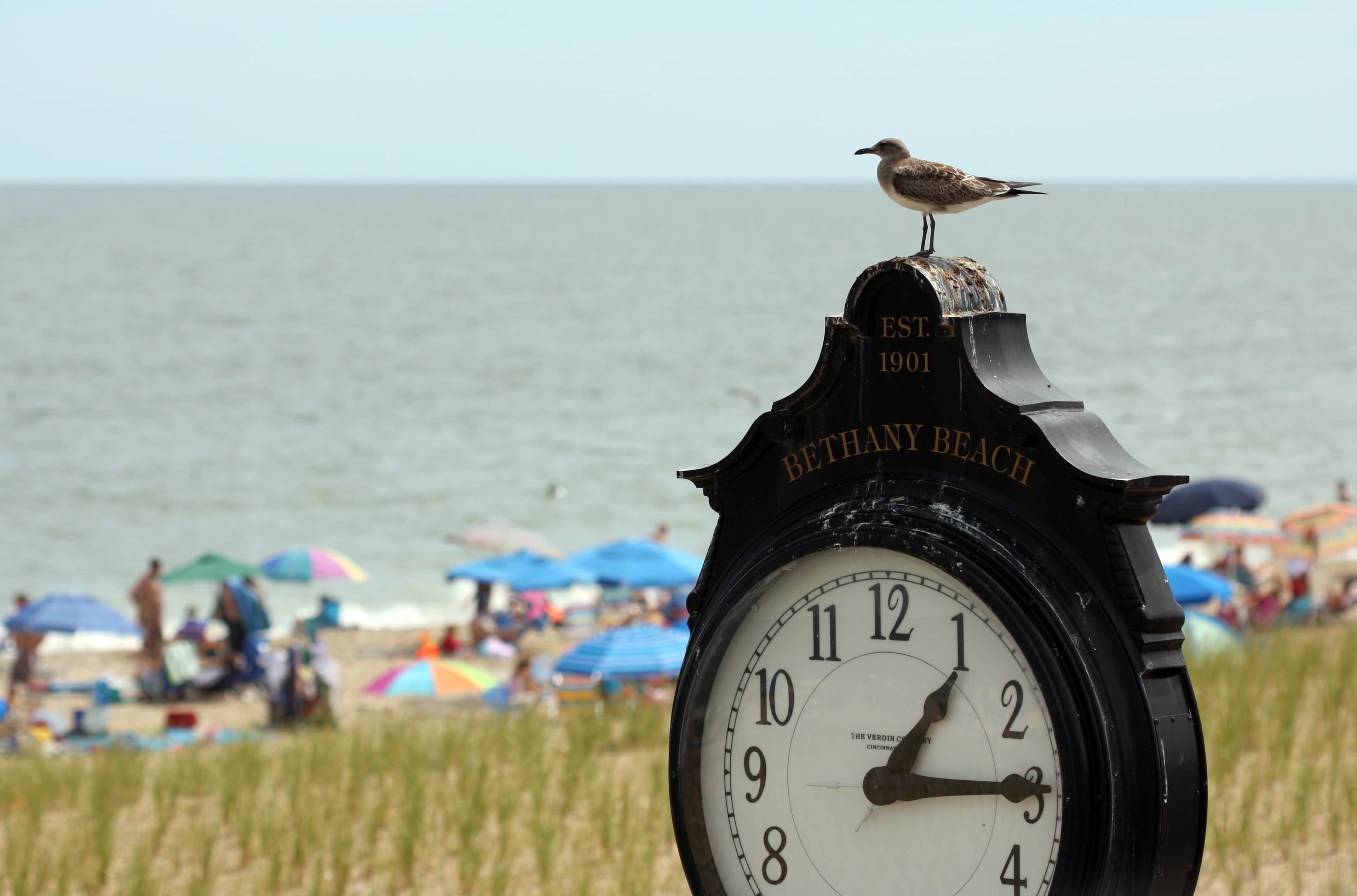 “Hey! Welcome to the New Castle court house, and to the 18th century. Today we’re trying a case of failure to control a horse in a public place. You, sir, how old are you? Seven? Old enough to stand trial. You, young man, you can be our judge. And you adults can be the jury.”

Few words instill in me such a sense of clammy discomfort as “audience participation”; had we been back home in England I would have turned and fled. However, this being America, our guide Kathy being devoid of any hint of self-consciousness, and my nephews Harry and Alexander having lived in the States long enough to have overcome their natural English awkwardness, we assume our assigned roles.

And it proves to be the perfect introduction to life here in colonial New Castle, Delaware. This is a beautifully preserved city of cobbled streets and old houses (most still lived in). At its heart is the old court house – once Delaware’s state capitol.

It would be easy to spend the entire day exploring the old town but we limit ourselves to finding the plaintiff guilty as charged (stopping short of carrying out the death sentence imposed by his elder brother) and experiencing the “colonial dining experience” of Jessop’s Tavern before saying goodbye to my sister and her boys and setting off down the Delmarva Peninsula.

This is, to all intents and purposes, an island. To the west is Chesapeake Bay, to the east is Delaware Bay and the Atlantic Ocean, and the 14-mile Chesapeake and Delaware Canal that crosses the northern isthmus completes the sense that the peninsula should logically be a single state. Instead, it is a shared hinterland bearing the clumsy compound acronym of its parent states: Delaware, Maryland and Virginia.

And as we cross over the canal on Delaware Route 9, it’s easy to understand why the region is seen as a place separate from the mainland. Head west from New Castle and you’d soon be in Baltimore. Head south and you enter a marshland country, tall grasses growing alongside slow-moving rivers, fishing boats bobbing next to rickety jetties.

It’s a cliché, I know, but the pace of life here really does reflect these sluggish waters. Virtually the entire length of Delaware 9, from New Castle to Delaware’s modern-day capital, Dover, is designated the Route 9 Coastal Heritage Scenic Byway and we’re happy to take it at its natural pace, cruising slowly through quiet communities and flat farmland on our way down the eastern edge of the peninsula.

Dover, which became the state capital in 1777, boasts a pleasant historic district based around a central square known as The Green. The 1792 State House that looks out onto The Green is well worth a visit for its picture-postcard location and excellent interpretive tour. Hotel-wise, though, Dover is one of those places where you have no option but to head for the nearest major highway – in this case U.S. Route 13 – and choose your lodging from among the usual mid-market chains.

Actually, that’s not strictly true. If you’re into gambling, horse racing or NASCAR, there’s the huge Dover Downs complex with its hotel and casino just outside of town, but none of those attractions do it for me.

From here we continue our journey south, now on Delaware Route 1, the “Coastal Highway.” And indeed, after making its way through more gentle green countryside, the road does eventually turn into a coastal highway, although you’d be hard pressed to know this without looking at a map; sand dunes bar the view to the Atlantic in all but a very few places.

From the occasional glimpsed view of the beaches, this southernmost section of peninsular Delaware looks the kind of place that families come back to year after year for long summers of swimming, fishing and dusting the sand off peanut butter and jelly sandwiches. The last time I was on an Atlantic beach was as a child in the summer of ’68; take away the modern SUVs and people carriers and I could be right back there.

Sadly, the spell is broken as we cross from peninsular Delaware into Maryland and the windswept sand dunes give way to the sheer awfulness of Ocean City, a 9-mile strip of hotels, motels, fast-food joints, amusement parks and All the Crab Legs You Can Eat eateries. I guess the people enjoying the beauty of the beaches a few miles back need somewhere to stay, but the contrast between the two places could not be greater.

Well actually, it could. Arrive at the Virginia state line 40 miles further south and there might as well be a sign saying “Welcome to Dixieland, Y’All.” Instead, there’s a store packed to the ceilings with T-shirts, baseball caps, lighters and other assorted tat, all carrying variations on the themes of “Kiss My Rebel Ass” and “It’s a Redneck Thang.”

OK, it’s obviously aimed at visiting tourists but a store like this does sit incongruously in an area where racially based social deprivation is immediately apparent. Instead of high-rise condos and endless opportunities to spend, there are poor black shantytowns and derelict stores, motels and gas stations. It’s a culture shock to be driving past people living in shacks so nailed together and shaky-looking that you double-take to check they’re not a National Park Service reconstruction.

As if to emphasise the change, the skies darken and a light rain begins to fall as we speed on down U.S. Route 13 toward our destination for the night, Cape Charles.

Situated on the Chesapeake Bay side of this narrow strip of Virginia’s Eastern Shore, Cape Charles has even more of a sense of isolation about it than the rest of the region, a feeling that it has its back turned on the rest of “the island” and instead looks west towards the mainland. As indeed it does: At the heart of the town is the harbour and terminal serving the rail car ferries that ply the 26-mile route over the bay to Norfolk.

Our hotel for the night is the Cape Charles Hotel Historic Inn, recently refurbished at a cost, say the owners, of $3 million. Its location – overlooking the harbour – is perfect and the restoration work is of the highest quality, but the fact that it’s the only real hotel in town means there’s no price competition. And when you’re paying nearly $200 a night, little things like the complete lack of ice or a coffee machine either in the rooms or in the communal sitting room (the owners live off the premises) can really grate.

This aside, the Wagner family should be congratulated for their attempts at reinvigorating Cape Charles. While most towns around here welcomed the visitors brought in by the opening of the Chesapeake Bay Bridge/Tunnel in 1964, for Cape Charles it spelt the end of its days as a passenger ferry port.

For us though, the drive over – and under – the bay has been the most eagerly anticipated leg of this particular journey, so we’re up with the birds in the hope of a brilliant sunrise. Sadly, nature fails to deliver but the bridge more than lives up expectations.

It’s not as beautiful as I’d anticipated but the drive is sensational. First we soar up over a bridge, then skim along the sea before diving beneath the waves through the tunnel sections that allow shipping lanes to be maintained. It’s certainly a weird sensation to be on collision course with a Navy warship before suddenly dipping beneath it.

We’ve been told it’s a tradition for early-morning drivers to stop for breakfast at the Sea Gull Pier Restaurant near the south end of the bridge, so we pull off for bacon, eggs and a very welcome coffee. The restaurant doesn’t look as if it’s changed at all since it opened over 40 years ago and I wouldn’t be surprised to learn that the ladies who run it today were serving on its opening day too. And, given that most of the Delmarva Peninsula seems to be stuck in a series of different time warps, I reckon that’s just how it should be.

Graves & Guns on the Natchez Trace