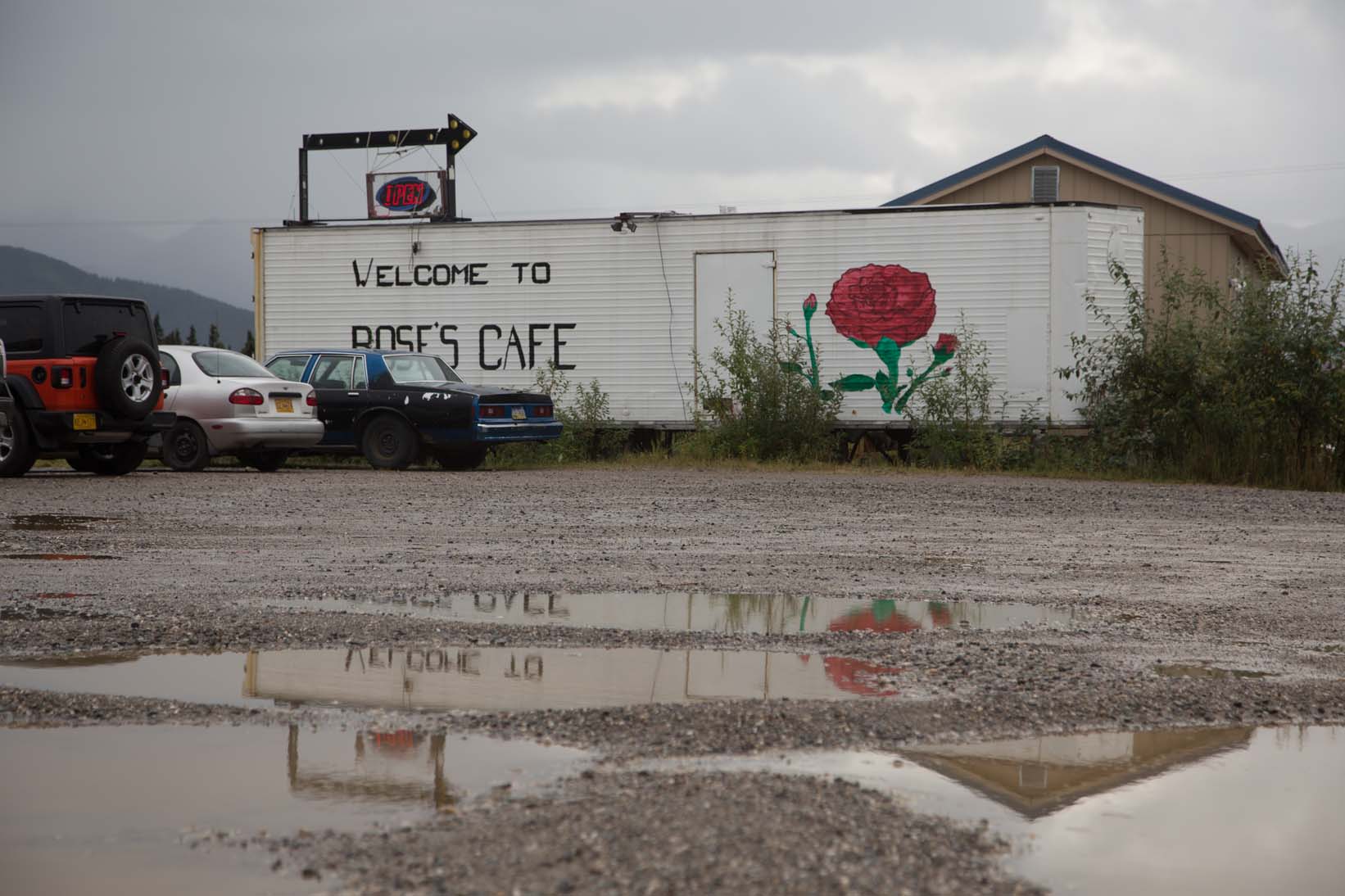 From the moment we landed in Alaska almost a week ago, we’ve enjoyed almost unbroken sunshine, usually warm enough to sit outside for lunch and dinner. Today though, we wake up to rain, set off in rain, and arrive in rain. As this a primarily a driving day it’s not a major problem and the experience somehow feels very ‘Alaskan’.

The same can be said of our breakfast venue, Rose’s Café, heading north out of Healy on the (George) Parks Highway. Its presence is announced on a hand-painted old trailer unit by the side of the road and the battered cars and deep-looking puddles in the parking area out front do little to alter the impression of this being something of a rough and ready operation, but inside it’s clean, warm and welcoming, with good food and coffee.

This sense of being somewhere that’s just been nailed together, where a culture of ‘make do and mend’ applies as much to buildings and vehicles as it does to clothes, becomes a familiar theme over the coming weeks, and it’s apparent just how different Alaska is from much of the Lower 48. So many places feel as if people have either only just arrived and haven’t had time to put down proper roots yet, or don’t plan on staying for long anyway, so have decided that it’s not worth investing in something more permanent. Maybe it’s the remoteness. Maybe it’s because Alaskans don’t feel the need for the frills and fripperies the rest of us have grown used to. Whatever it is, it’s for good reason that the state added the slogan ‘The Last Frontier’ to its license plates in 1981.

Our destination is a cabin in North Pole, just outside Fairbanks, about 130 miles north and there’s little to tempt the traveller off the main highway until you reach the town of Nenana. (Na is a common suffix on Alaska place names and means ‘river’.)

We enter town knowing literally nothing about the place, really just delaying our arrival in Fairbanks until it’s time for lunch, so it’s a pleasant surprise to discover that it’s home to not one but two museums: the Alaska State Railroad Museum, housed in the 1923 train station; and the Alfred Starr Cultural Center and Museum, an impressive facility packed with information and exhibits on the local Athabascan culture.

There’s also a sign highlighting the town’s place on the Iditarod map. The Iditarod Trail Sled Dog Race is an annual endurance event that runs from Anchorage to Nome on the western Bering Sea coast. Mushers, both men and women, drive teams of between 12 and 16 dogs, and the winner will complete the 1000 mile course in around eight or nine days It captures the imagination and attention of the state like perhaps no other sporting event in the world. The only thing I can think of that comes close is the Tour de France. To its obvious pride, Nenana was the 1st checkpoint in 2003, 2015, and 2017.

The fourth and probably most famous attraction in town is the Nenana Ice Classic. Every winter, when the Tanana River freezes, the official wooden tripod (something of a misnomer as it actually has four ‘legs’) is placed on the ice and connected to an on-shore clocktower. In spring, when the ice starts to melt and the tripod moves 100 feet downriver, the line breaks and the clock stops. People pay a couple of dollars to guess the date and time when the clock stops and the closest tickets wins. The event began as a wager between railroad men in 1917; today it attracts global interest and the pot will top $300,000.

Our interest in Nenana satisfied, we head into Fairbanks for lunch. Now, I know no city looks its best in the pouring rain and we almost certainly fell unlucky with our choice of diners (yes, multiple; the food in the first was so bad so we leave it almost untouched), but our very brief experience of Alaska’s second largest city fails to engage us. So instead of exploring, we drive on to North Pole, 15 miles away, and the beautiful cabin we’ve booked on the bank of Chena Slough.

We did have time over the next couple of day to come back and have another look around but there always seemed to be something more interesting to do. Our loss, I’m sure.