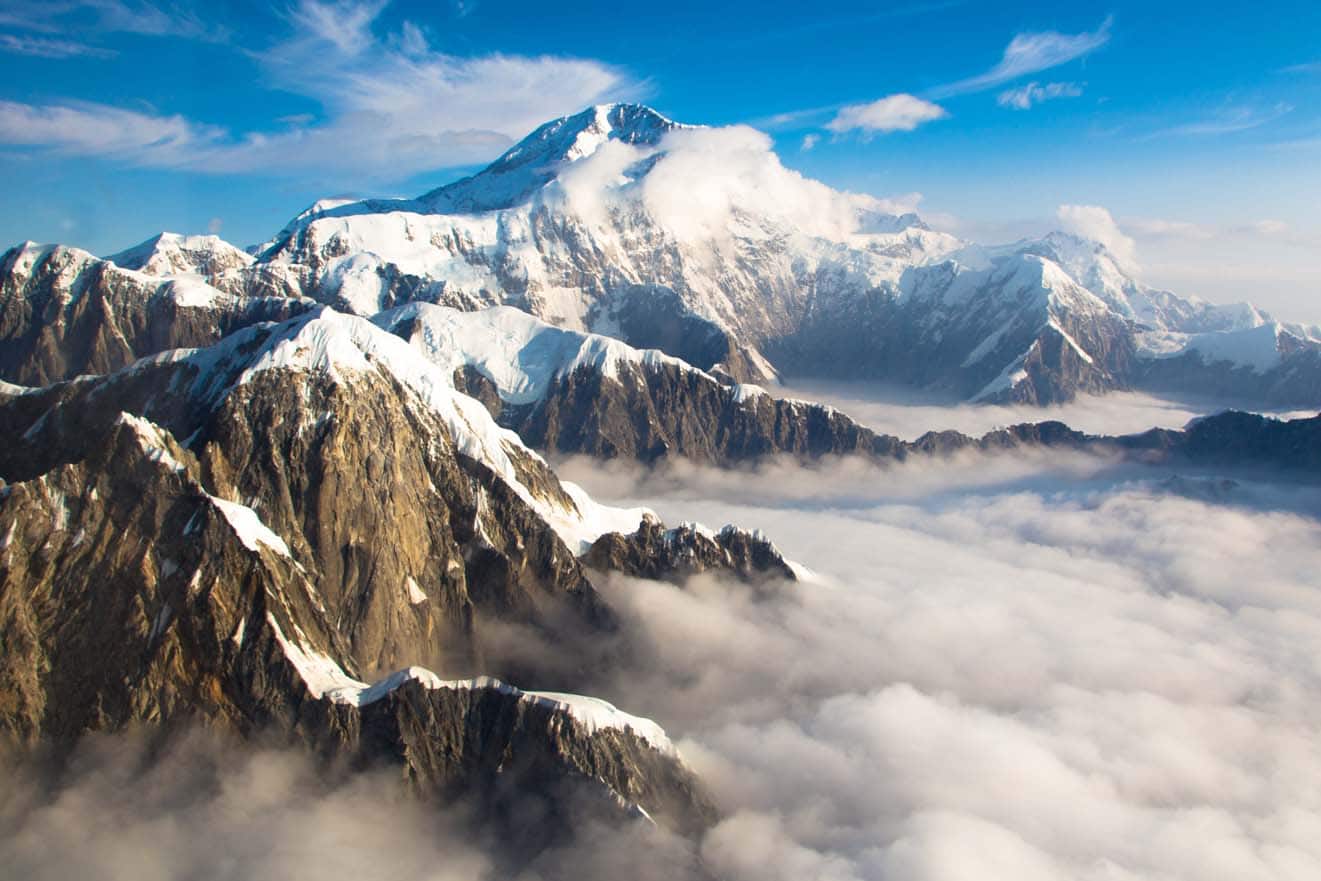 Ever since we’d started planning this trip, I’d been aware that Talkeetna was not only a base for those hardy people who head out to tackle the ascent of nearby Denali by foot / crampon / rope (a challenge that can take as long as 16-17 days – even more if the weather causes delays), but also a center for the slightly softer method of visiting Denali, flightseeing.

Right up until a couple of weeks ago, I’d hummed and hahhed about the cost before finally convincing myself that we’re only here once. And wow, am I glad I did.

We booked K2 Aviation’s Denali Flyer with Glacier Landing tour and every single moment from check in and take off to landing back at Talkeetna’s little airport is relaxed, friendly but 100% professional, geared up to making sure everyone feels as comfortable and confident as possible.

It’s the first time we’ve been in a single engine plane like this – there’s eight of us plus pilot – and any disquiet over clambering into something so small and fragile looking soon evaporates. We are all equipped with headsets and mics so we can hear and communicate with our pilot guide, and after explaining the many and varied safety features of his aircraft – including equipment that will guide rescuers to our location should we happen to go down in the mountains – we’re up and away, heading north towards Denali.

For the first part of the flight the skies are clear and the views huge but as we near our destination the rain clouds that have been creating so many problems on the ground begin to build and obscure the view. However, as we approach the Alaska Range, we see that far from being hidden, the three peaks of Denali, Mount Foraker and Mount Hunter are breaking majestically through the clouds, appearing to float above a sea of billowing white. The effect is dramatic, moving, and totally unforgettable.

Our flight takes us between and around them, passing so close to the jagged, snow-covered walls that the peaks themselves disappear out of site far above us. It’s just breathtaking. After assessing the conditions, we’re told that we are going to attempt a glacier landing so we descend into the clouds, trusting our pilot’s skill – and the instruments in front of him – that our next contact with terra firma will be horizontal ice and not vertical granite. Moments later we break through the cloud below, make our landing, and step out onto the glacier. It’s bitterly cold but we all have smiles fixed on our faces. As the clouds are threatening to close in on us, we’re given just a few minutes to take it all in and take our photographs before it’s time to buckle up and take back to the air for the short return flight to Talkeetna.

It’s a totally exhilarating experience, one that I’d urge anyone to do. It’s not cheap – it’s Alaska – but if you’re there and can find the budget, you won’t regret it. You may not be lucky enough to do it on a cloudy day but I’m sure clear skies are almost as good.

The second part of our Talkeena adventure takes the form of an afternoon on the Hurricane Turn Train, America’s last flagstop service. Running the 57 miles between Talkeetna and Hurricane Gulch (where it turns back), it provides access to remote cabins, hiking trails, and hunting destinations. Some stops are scheduled, others are at the request of passengers either on the train on the way out, or standing by the side of tracks looking for a ride into town.

Truth be told, the majority of passengers are just there for experience and photo ops like us, but to see people unloading the provisions that enable them to live off-grid does deliver a sense of how much this part of America remains frontier country.

As well as these request stops, the train also pulls over to let faster services pass by, and takes breaks at attractions such as the studio home of children’s illustrator Shannon Cartwright; a salmon spawning river next to a particularly photogenic bridge; and a collection of disused railroad cars at the old town of Curry, and at each we’re encouraged to disembark and stretch our legs for 10 minutes or so.

The fact that it’s a slow train with frequent stops (and no buffet service – you bring your own lunch, snacks and – in our case – a couple of cold ones from the the Denali Brewing Co.) makes for a long afternoon – we’re not back in Talkeetna until 7:00 pm – but after the morning’s flight excitement, a bit of slow pleasure provides the perfect contrast.

Alaska Day 11: McCarthy and the Kennecott Mine