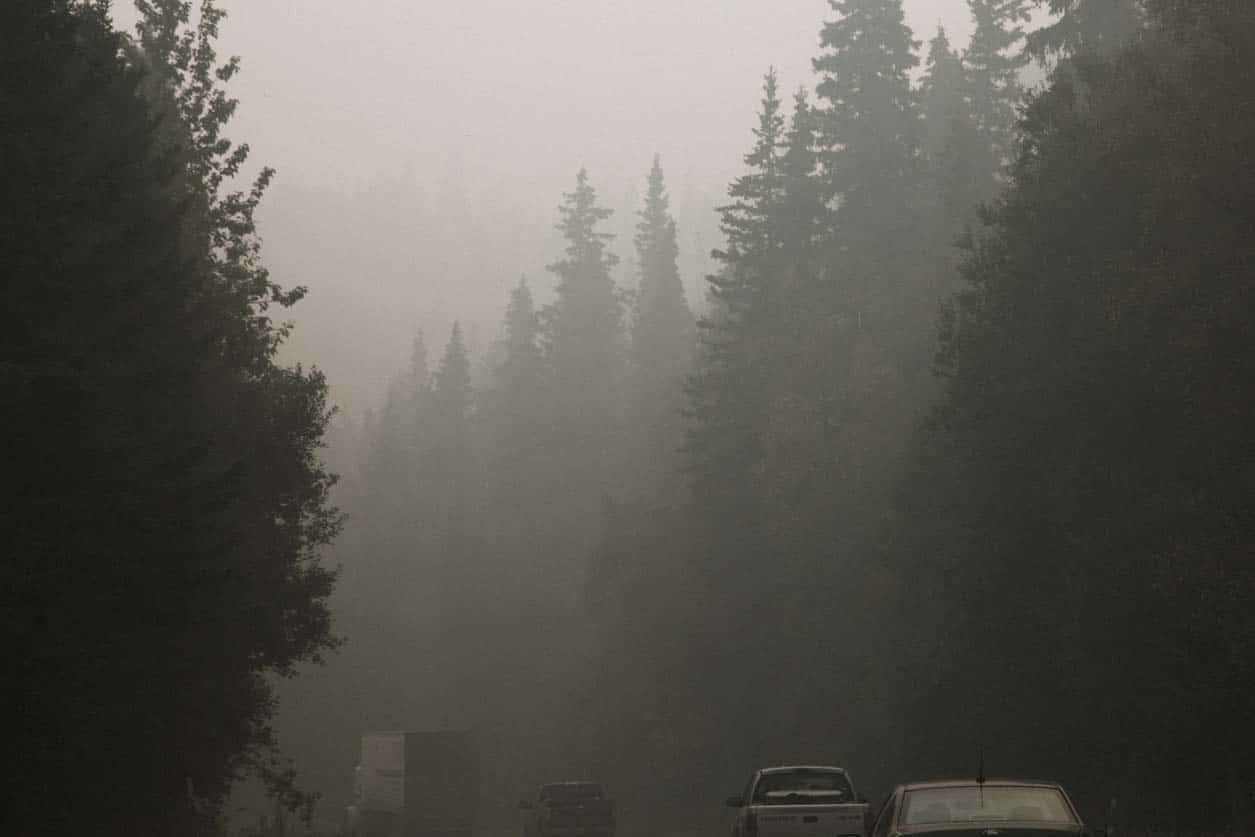 This is our penultimate day and, like yesterday, is really just dedicated to getting from A to B which in this instance is Soldotna, on the central west portion of the Kenai Peninsula, to Wasilla, in the Matanuska-Susitna Valley north of Anchorage, a drive of just under 200 miles.

The leg we’re most looking forward to is the section of Seward Highway that runs along the northern shore of Turnagain Arm, a stretch of highway reckoned to be one of the most beautiful in America.

First though, we must once again tackle the Sterling Highway, location of the Swan Lake Fire. And the prospects don’t look great as we draw to a halt behind a line of parked vehicles whose occupants are standing outside in the manner of people who know they’re not going anywhere in a hurry. And sure enough, we’re being held as the road ahead isn’t considered safe for traffic.

No-one seems entirely certain whether this is a complete and indefinite closure or something more managed, but it’s the only way through and there’s no alternative other than to sit back and wait.

Eventually, after maybe an hour or so, we see traffic approaching from the Cooper Landing direction, led by a slow moving white truck and, once they’ve passed by, we follow the pilot truck back east.

As we witnessed on the outbound journey, the effects of the fire have been devastating and it continues to rage. Flames still blaze by the side of the road and dense smoke reduces visibility to a matter of yards. For mile after mile after mile, those trees that are not actively burning are either smouldering or left burnt and blackened by the inferno that has devoured so much of this area.

These are dreadful scenes of course, and one can only have admiration for those tasked with keeping people and as much property as possible safe, but the shock of it all is tinged with a guilty sense of awe at the overwhelming, almost unstoppable power of this force of nature.

At Tern Lake the Sterling Highway turns sharply north and immediately merges into Seward Highway, and this takes us all the way up to Anchorage.

The drive along Turnagain Arm is indeed beautiful, although I’m not convinced it would squeeze into my Top 10 USA Drives. The road clings to the narrow strip of flat land that sits at the foot of Chugach State Park’s steep mountains to our right. To the left is Turnagain Arm, a branch of Cook Inlet and renowned for tides that see the water rise by as much as 40 feet or 12 metres. So quickly do they come in that this can create a 6 ft high, 5-6 mph bore tide that is a magnet for thrill-seeking kayakers and surfers. And when the tide goes out, all that remains are mud flats.

It’s in as we pass though so we pull over at a place known as Beluga Point to see if we can spot any of the eponymous white whales. We have no luck in this respect but a man notices our binoculars and points excitedly toward the higher slopes of the mountain behind us: “Look, you can just make out Dall sheep!”

It would be rude to do anything other than dutifully turn our attention to the hillside behind and scan the slopes for these distant dots of white, but I have to say that, in a country that’s home to such apex predators as bears, wolves and mountain lions, this fascination with sheep is a complete mystery. (Much the same can be said about Trumpeter Swans; I know it’s a park ranger’s job to enthuse about all God’s creatures but we have swans back home too you know? And don’t get me started on Canada Geese!)

The shoreline drive is only about 40-45 miles so it’s not long before we’re heading north once again, passing through Anchorage and recommencing the route we took almost three weeks and 2,000 miles ago, up the Glenn Highway.

We have chosen tonight’s lodging, Mat-Su Resort on Wasilla Lake primarily for its proximity to Palmer, where the State Fair is being held, but also based on its claim to be the Mat-Su (Matanuska and Susitna) valley’s “premier year-round destination”, a “boutique hotel” with an “award-winning fine dining restaurant”.

The reality is that it’s a slightly odd place. We approach it down what feels like the road into a quarry and are directed to a small residential-looking building that serves as the reception desk (and crèche for the child of the girl who checks us in).

The hotel itself a standard two-story building with external staircases, and our room is large, clean and perfectly fine. It even has a balcony view out over a lake. But boutique? Not sure where that comes from.

There’s nothing wrong with the restaurant either (well, nothing that a couple more staff couldn’t fix – we get our drinks for free for remaining patient despite a frustratingly long wait) but again, they don’t do themselves any favours with the overblown ‘fine dining’ boast.

Anyway, the beers are as good as the crab cake and fish’n’chips that follow, and we sleep soundly. Which is all you can really ask for. And that leaves us just one day to go.