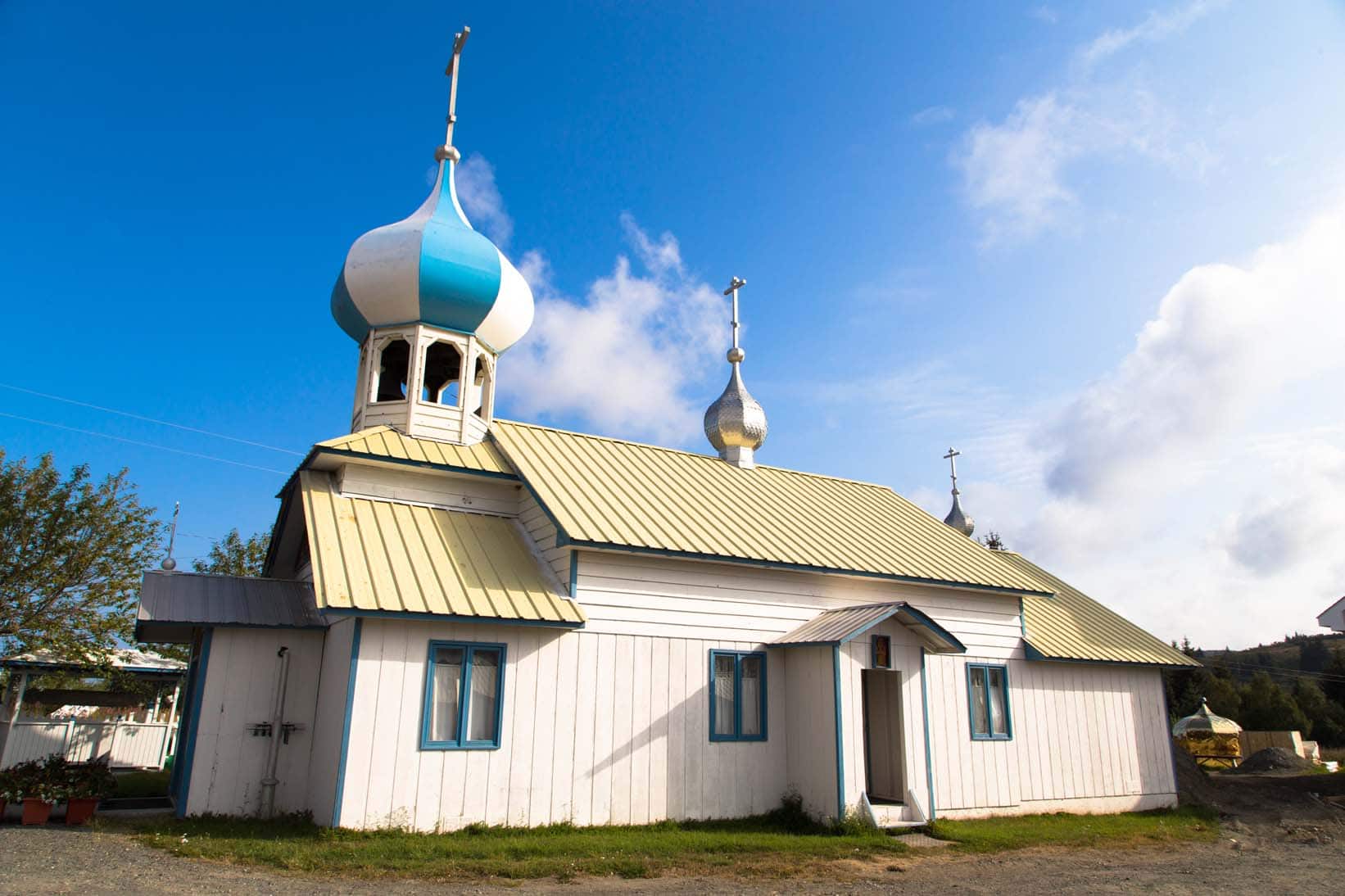 Once again we wake to brilliant sunshine and a crisp blue sky, the perfect end to our short but unforgettable stay on Homer Spit. We’re in no hurry to get off – our destination, a cabin just outside Soldotna, is little more than 75 miles north, a nothing distance even for a British driver – so we enjoy a leisurely coffee on the deck outside and take in the views.

Finally we tear ourselves away and begin the journey back up the Sterling Highway.

One place the guide books recommend along the way is Nikolaevsk, a small community of ‘Old Believers’, a Russian Orthodox sect that fled Siberia in 1666 to escape persecution after resisting forced changes to the church’s prayer book and traditions. Over the next 200 years, the Yakunin clan moved through China, Brazil and Oregon before settling on the Kenai Peninsula in 1968 and, since then, forging a good living out of fishing.

They continue to dress in traditional clothes – which certainly catches the eye in the Homer Safeway store – and some elders still speak little English, conversing in a Russian dialect called Slavonic.

Given their desire to live outside normal Western society, it feels wrong for Nikolaevsk to appear on the tourist trail (I felt much the same about the Amish communities of Lancaster County, PA., despite their obvious willingness to attract passing trade) but we overcome this feeling of uncertainty and follow the narrow, 9-mile road that winds its way into town.

Any concern we may have had about residents thinking we’re there to gawp at them is misplaced, because the streets are completely devoid of life. There are two things to see in Nikolaevsk: the photogenic Church of St Nicholas and the Samovar Café. The first, quite reasonably, is closed the public; the second is closed to one and all. We see a builder working on the town’s new church, who studiously ignores us, and a lady who waves at us as we drive away from the café, but that’s it.

To be fair, I think our experience may have been unusual: the town’s web site (or, maybe more accurately, the web site that claims to represent the town) suggests that visitor’s are more than welcome and reviews of the café are, with one or two exceptions, extremely positive. If you’re passing, see for yourself.

If Nikolaevsk is slightly weird, our next stop threatens to take things to another level. Back on the Sterling Highway at Anchor Point, we are immediately drawn to a ramshackle-looking store offering an appealingly eclectic range of antiques, used car parts, guns, bait and tackle.

We stop in the hope of maybe picking up an old licence plate or other such souvenir and anticipate spending no more than 5 or 10 minutes browsing through the assorted piles of dust- and rust-covered junk. But the guy running the place has a different idea and our conversation quickly switches from “Where you guys visiting from?” to “Ever seen a UFO?”. Over the course of the next half hour we learn that he is Alaska’s prime Ufologist; had his first close encounter as a child at junior school (an incident that was hushed up by the teachers); and has footage of a 2016 sighting on his phone if we’d like to see it.

What can we say? We watch the inevitably grainy and indistinct bright shapes moving around a fuzzy, dark grey background and make polite noises: Hmmmm … right … yeah … I see.

I’m certainly not dismissing the possibility of alien life visiting our planet – to my mind the chances of us being ‘alone’ in the universe are infinitesimally smaller than the contrary – but such obviously inconclusive ‘evidence’ just brings out the cynic in me. The truth may be out there but it’s not on the shaky screen of our new friend’s phone.

As a footnote to this encounter, I have since found a page on the UFO Hunters website (note: not that of New Scientist or the American Association for the Advancement of Science) that would appear to detail his sighting.

This part of the peninsula will seem familiar to visitors from the UK. The landscape is forested, green and gently rolling, pleasant in a non-spectacular way and a real contrast to … well, pretty much the rest of Alaska. It’s a coastal road but one that rarely offers views of the sea and were it not for the names of the towns along the way – Happy Valley, Ninilchik, Clam Gulch – it would be easy to imagine you’re in Cumbria or Northumberland in the north of England.

We detour into Kenai for lunch and take a stroll around the Old Town, a collection of cabins, houses, churches, stores and other buildings from the town’s early days (some date back to the late 19th century, the fire hall was built as recently as 1955). There’s also a short walk down to a sandy beach, which kills a little more time until we’re able to check into our cabin just outside Soldotna.

And to be honest, that’s how today feels: all we’re doing is killing time as we near the end of our journey. We still have another two full days before we fly home but after the excitement of the last three weeks, today has felt a little flat.

On a more positive note, if you’re looking for a romantic break, then the cabins at Escape For Two just outside Soldotna could be just the ticket. There are just two of them, both nicely rustic but equipped with every home comfort imaginable (including hot tub). There’s bubbly and chocolates on the side and rose petals scattered over the bed (which possibly takes the romance bit a step too far but you can’t say they don’t make the effort). Oh, and book Moose Cabin, not Dragonfly. The photos on the website may imply otherwise, but only Moose overlooks the lake; Dragonfly looks out into dense woodland. On the other hand, if petals on the bed ring your bell, the quality of view could very well be irrelevant.