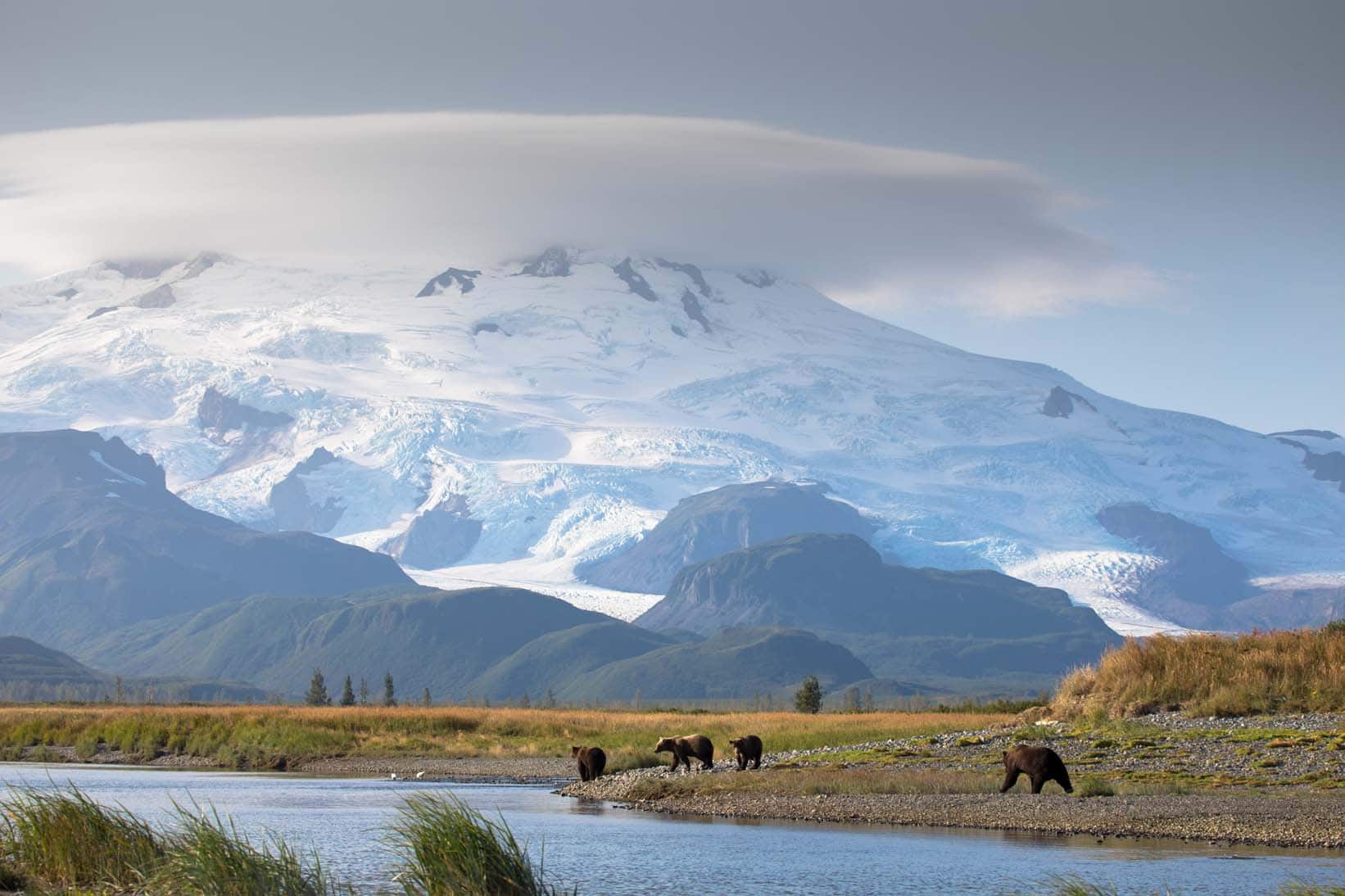 Ever since our first road trip in 2005, a meandering 4542-mile route from Chicago to Seattle, Carole’s enjoyment of America’s most wonderful landscapes has from time to time been compromised by the expectation of imminent death by bear. This hasn’t actually stopped us camping in the Redwoods or following a lonely trail in Glacier National Park, but where there are bears, the fear is always present.

Now, if there’s one thing Alaska’s famous for (aside from the fact that every second person appears to be part of an extreme survival reality show), it’s its bears. You can’t have an Alaskan nature documentary without footage of ursus horribilis catching salmon at Brooks Falls. So, to use an entirely inappropriate metaphor, bears are the elephant in the room on this trip.

As they say though, the best way to overcome one’s worst fears is to confront them face on. And that’s why we find ourselves parking up at Homer Airport while it’s still dark, pulling on waders, and signing an endless number of forms absolving our outfitters, Alaska Bear Adventures, of any responsibility for anything that might befall us over the course of the next few hours.

There are a dozen of us and we’re split into three groups of four, each assigned a pilot/guide. Ours is Derek, the most experienced in both flying and bear scouting terms, and he leads us out onto the airfield for a pre-flight briefing. As well as highlighting our aircraft’s various safety/rescue features, he also explains that, while bear spray is not carried (it’s an unpressurised cabin so aerosols are strictly forbidden), they do have distress flares that could be deployed in a bear’s direction if absolutely necessary, but in 15 years, they’ve never had cause to do so.

Briefing over, he asks our group whether this is the first time for any of us in such a small (6-seater) plane. “No? So it’s just me then”, a joke he obviously rolls out every time but it puts a smile on my face at least.

And with that, the three planes are airborne and we’re on our way southwest in search of at least some of the 3,000 grizzlies that call Katmai National Park home.

The sun rises as we’re in the air and the views of the mountains, rivers and glaciers are as spectacular as you could hope for. At one point we bank steeply so Derek can check for bears far below but there’s nothing doing so we head on over more snow-capped ranges before making our descent towards Cape Douglas.

The landing is surprisingly smooth given that it’s on a pebbly beach strewn with large pieces of driftwood and as we climb out, there they are. A couple of hundred yards or so away, a sow and two cubs are making their way towards the grassy bank that runs the full length of the beach. A frustratingly distant and brief sighting, but a sighting nonetheless.

Our groups split up again and we head separately into the high grass towards the Douglas River beyond. We move slowly and carefully in single file, and all the while Derek is in radio contact with the other guides, letting them know where we are and advising them on where they should go. And then suddenly he stops and signals for us to crouch down. Dead ahead of us in the thigh deep grass we can make out the unmistakeable shape of a grizzly. We’re reassured that he’s a good 50 yards away but I’d be surprised if it ‘s much more than half that (not that I’m going to pace it out to prove a point!), and we just kneel and watch him tear pieces off a large salmon. He knows we’re here – he glances towards us every now and again – but shows no interest beyond that.

After a while we move on and head down the other side of the bank onto a flat open area of sandy beach, mud flats, and the Douglas River. At first we spot just a solitary bear, splashing around in a tidal pool teaming with trapped fish, but gradually others appear, emerging from the grass or ambling towards the river from the distance.

Within 20-30 minutes of our arrival, we are surrounded by bears, some gorging in the pools, some chasing prey in the river, some moving away to enjoy their catch somewhere a little more private. At one point I reckon there are as many as eight or 10 of them in view. We move across the flats to get a closer view of those in the river, then kneel down and settle in to watch. Travelling the States is full of unforgettable experiences but there aren’t many to equal this.

As with our orca adventure 48 hours earlier, we have fallen incredibly lucky: the previous day our guides had only seen two bears all morning.

And yes, even Carole appears enraptured. I say ‘appears’ because we have agreed ahead of things that she wants to handle this her own way, without any pressure from me, so we haven’t actually spoken a word to one another since arriving at the airport!

The only time her body language betrays a sense of discomfort is when a very large female walks up river within a matter of yards of our group (Carole is closest to the river) but we barely warrant a second glance, so focused is she on the next catch. At this time of the year, when spawning salmon return, bears enter a state known as hyperphagia, in which their appetite becomes almost insatiable and they can consume as many as 100,000 calories in a day. So full are the bears in the tidal pools that we see them catch fish, bite the brain and then discard the flapping body.

A couple of hours later, memories created (and memory cards full), we make our way slowly back to the beach and clamber on board for the return flight. It has fulfilled a dream and left us both appreciative of just how lucky we are to have been able to experience such an adventure.

As for the rest of the day … to be honest we spend it in a bit of a daze, probably the after effects of such a huge adrenaline rush.

Just for the record, we have a superb lunch (seafood chowder, octopus poke) at the Little Mermaid, widely held to be the best restaurant on Homer Spit, and a bit of a lie down in the afternoon. In the evening we a beer at Land’s End at the tip of the Spit and another at the famous Salty Dawg Saloon; followed by seafood/salad to go from Captain Pattie’s Fish House next door to our lodging.

It’s all great, but the impact of our Alaska bear adventure has overwhelmed everything else.