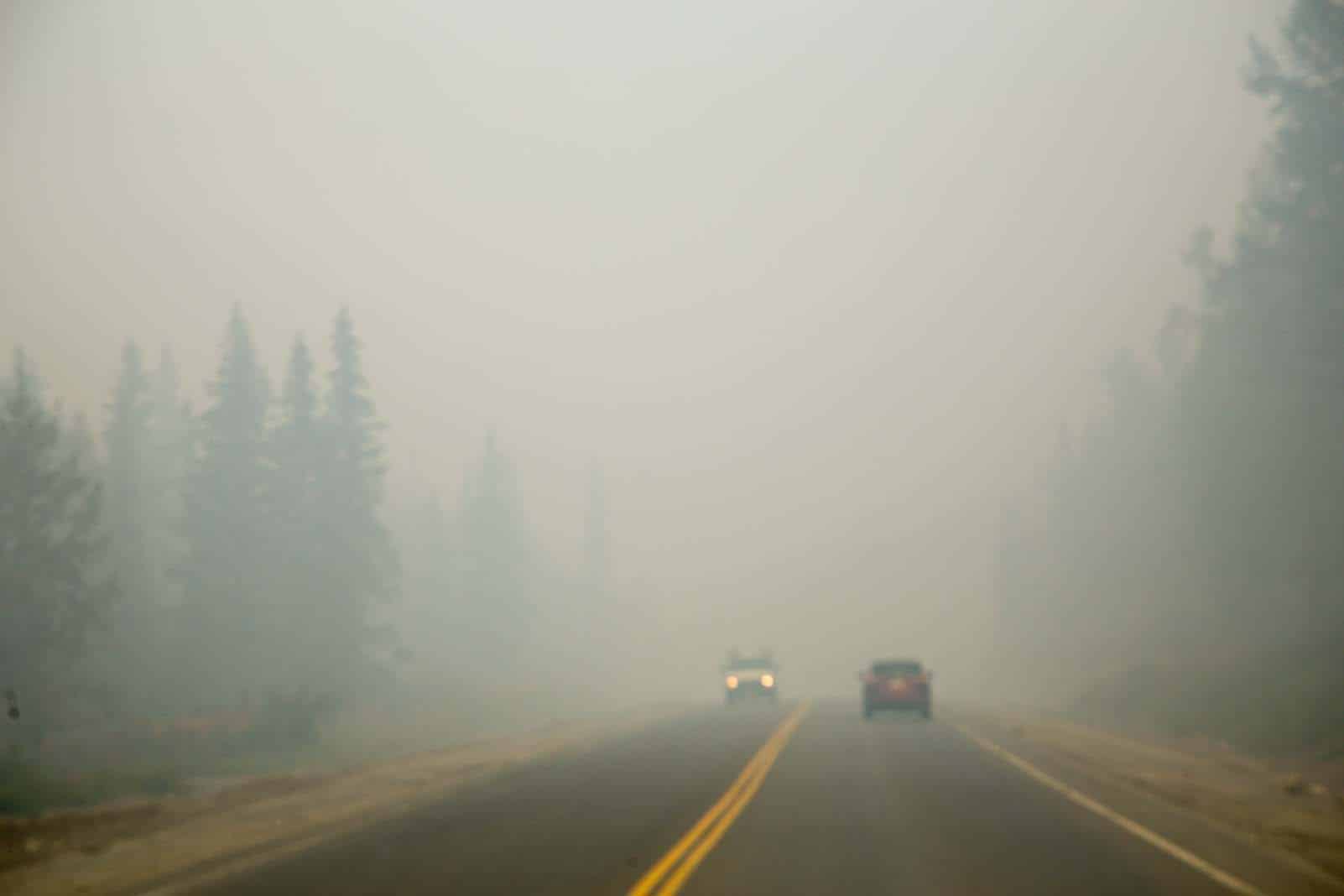 We’re on the move again today, heading west on the Sterling Highway then south to Homer. This brings us into close proximity of the Swan Lake Fire that has been ravaging the area for weeks and its impact is immediately apparent. A blanket of dense smoke reduces visibility to no more than 50 yards or so; businesses have shut up shop and painted ‘Closed for the season’ messages on wooden pallets outside; pull-out areas – all shut off to public access – are packed with the vehicles of firefighters; and in many places the trees lining the road have been reduced to charred skeletons.

It’s the scale of the fire and resulting damage that’s most shocking; how do you even begin to tackle something this large? I guess it’s a matter of containment and protection of life, and accepting that nature will eventually run its course.

Once we’re west of Sterling, the worst of the smoke is behind us and by the time we reach bustling Soldotna, it has completely disappeared and we’re enjoying clear blue skies once again.

We’re suckers for local museums, especially those where they’ve gathered together a collection of old buildings, so the Soldotna Historical Society’s Homestead Museum is an absolute treat. The main display, housed in a log cabin, contains a wealth of artifacts relating to the development of the area through homesteading and what I find particularly interesting is just how recent this history all is.

When you visit this kind of museum in, say, Wyoming or Oregon, you’re going back as far as the wagon trains of the mid-19th century and the Homestead Act of 1862. Here in Soldotna, it was the Homestead Act of 1947 (giving priority to WWII veterans) that tempted settlers to a place that had until then been the preserve of hunters. For us baby boomers – people of an age my Dad used to describe as “entering one’s early prime” – these settlers were our parents’ generation so many of the items on display here will probably be familiar from early childhood days.

The museum is located in the unspoilt woodland of Centennial Park and a path leads the way to other buildings including original dwellings, Slikok Valley School (built in 1958), and a larger building housing an outstanding display of wildlife mounts.

It is here that we also learn the story behind the state flag. In 1926, a contest was held in which schoolchildren throughout the territory were invited to submit designs for a flag. Thirteen year-old Benny Benson, an orphan of Russian-Aleut and Swedish descent, came up with the idea of the constellation of Ursa Major – the Great Bear – to symbolise strength and the North Star to represent Alaska’s location, and his design was adopted as the official flag for the Territory of Alaska on May 2, 1927. How have we spent more than two weeks here without hearing this story until now?

From here we head south, stopping in Ninilchik to take a look at the famously picturesque Russian church that stands on the hill above the original settlement of the village. Built in 1901, the Holy Transfiguration of Our Lord Chapel is a small white and green building crowned with five gold onion domes, each topped off with a distinctive Russian Orthodox three bar cross. Out front there’s a small densely overgrown cemetery. The fact that the wooden crosses marking the graves are almost overwhelmed by weeds seems strange given that the markers themselves are brilliant white and many are adorned with what at least appear to be recently placed bouquets of flowers (man-made rather than fresh).

A mile or so further on we stop for a surprisingly good lunch at Rosco’s Pizza and less than an hour later we reach the southern terminus of the Sterling Highway in the form of Homer – or, to be more precise, Homer Spit, the 4.5 mile strip of land that extends out into Kachemak Bay.

Homer Spit is a scruffy, scrappy looking place, an unpromising stretch of real estate on which the city of Homer has built a road, residential properties, industrial units, restaurants, hotels, and retail outlets, as well as a fishing harbor and ferry / cruise ship port. It is the heart of Homer’s tourism industry and a destination for thousands of visitors hoping to enjoy the landscape, catch fish, and watch bears. And it’s the latter that has drawn us here.