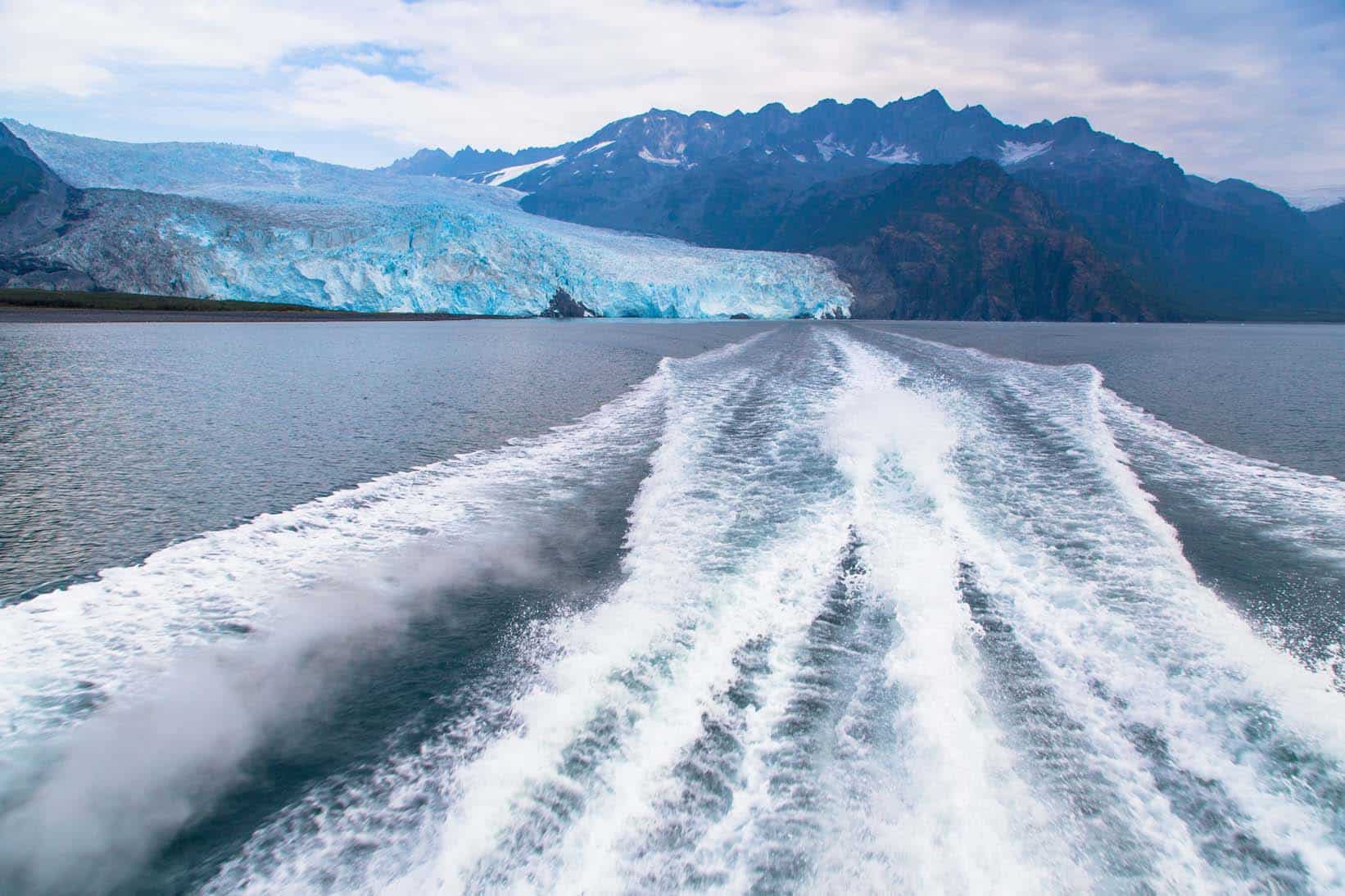 Up bright and early for our Kenai Fjords National Park Tour, a wildlife and glacier cruise that will take us south through Resurrection Bay and then back up north via Aialik Bay to the Aialik Glacier.

We’re instructed to check in at the boat harbour by 7:00 and to wait at the outfitter’s offices until invited to board for an 8:00 departure. All passengers obediently obey, with the exception of a group of Russian visitors who make their way straight to the boat and are rewarded with the pick of the seats. I know it’s not important in the overall scale of things but it still rankles six months later. Ah well. I need to get better at letting these things go.

The tour itself is as wonderful as it could possibly be. The further we get from Seward, the less impact the smoke from the fires has on the light, and after an hour or so we’re once again enjoying brilliant blue skies and clear long distance views.

Throughout the morning we’re treated to close up sightings of puffins, harbor seals, Stellar sea lions, and sea otters, and we spot a humpback whale whose tail fin or fluke is missing a large chunk (possible resulting from an orca attack). Throughout the trip, our captain – tirelessly supported by a helpful and friendly crew – keeps us informed of sightings and provides a constant stream of information on Kenai Fjords National Park and its wildlife.

We arrive at our primary objective, the Aialik Glacier, and make our way between ice floes on which dozens of seals are basking in the sun. Once in position, the captain switches off the engines, allowing us to listen to the creaks and groans of the ice. Occasionally there’s a sharp snap and we see the splash of ice falling from the toe of the glacier into the sea.

The difference between the speeds of sound and light means that by the time the sound of calving reaches us and we work out the direction it’s come from, the ice has usually already hit the water but it’s a spectacular sight nonetheless. It’s an experience to be savoured and I think everyone on board – captain and crew included – would have been happy to stay longer but time, tide, and timetables wait for no man so we head off on the return journey.

As we approach the mouth of Aialik Bay, our captain informs us that we’re going to take a slight detour in the hope of encountering a pod of orca that has been seen nearby. This will mean he’s going to gun the engines across an open – and therefore choppy – stretch of sea so we should all take our seats. Unfortunately, the gap between this announcement and him hitting the throttle can be measured in seconds and there isn’t time for me to get off deck before controlled directional movement becomes a physical impossibility.

I begin by clutching onto the handrail for dear life but as the speed increases I stretch my legs out and brace myself in a fairly awkward fashion against the lower rail opposite. And to the consternation of some and no doubt amusement of others watching from inside, I have no option but to maintain this undignified position for the next quarter of an hour or so.

Finally we reach our goal and a more comfortable speed /calmer waters, and I’m able to relax a little and enjoy the trip again. And within moments, we find ourselves in the midst of a pod of maybe 20 or more orcas. It’s a magical experience and the crew appear as excited as we are; we’re told that this is the best sighting they’ve had in weeks.

Everywhere we look, these sleek, torpedo-like animals are surfacing to spout, barely creating a wave as they glide gracefully through the water. Occasionally one breaches completely, something that would be easy to anthropomorphize as an action of sheer joy but is actually believed to be a way of communicating when other noises (such as a nearby boat) could mask acoustic signals.

Again, time constraints dictate that we must leave before anyone would really like but it’s been the icing on top of an already rich cake, and – sadly – the end of what has until now been a wonderful day. I don’t know whether it’s the effect of those 15 minutes spent bouncing though the waves or the come down from the adrenaline of the whale sightings but, either way, I suddenly feel more than a little queasy and on the advice of the crew, spend the journey back to Seward on the lower deck at the rear of the boat, in the company of one or two similarly afflicted passengers. Ah well, it was worth it.