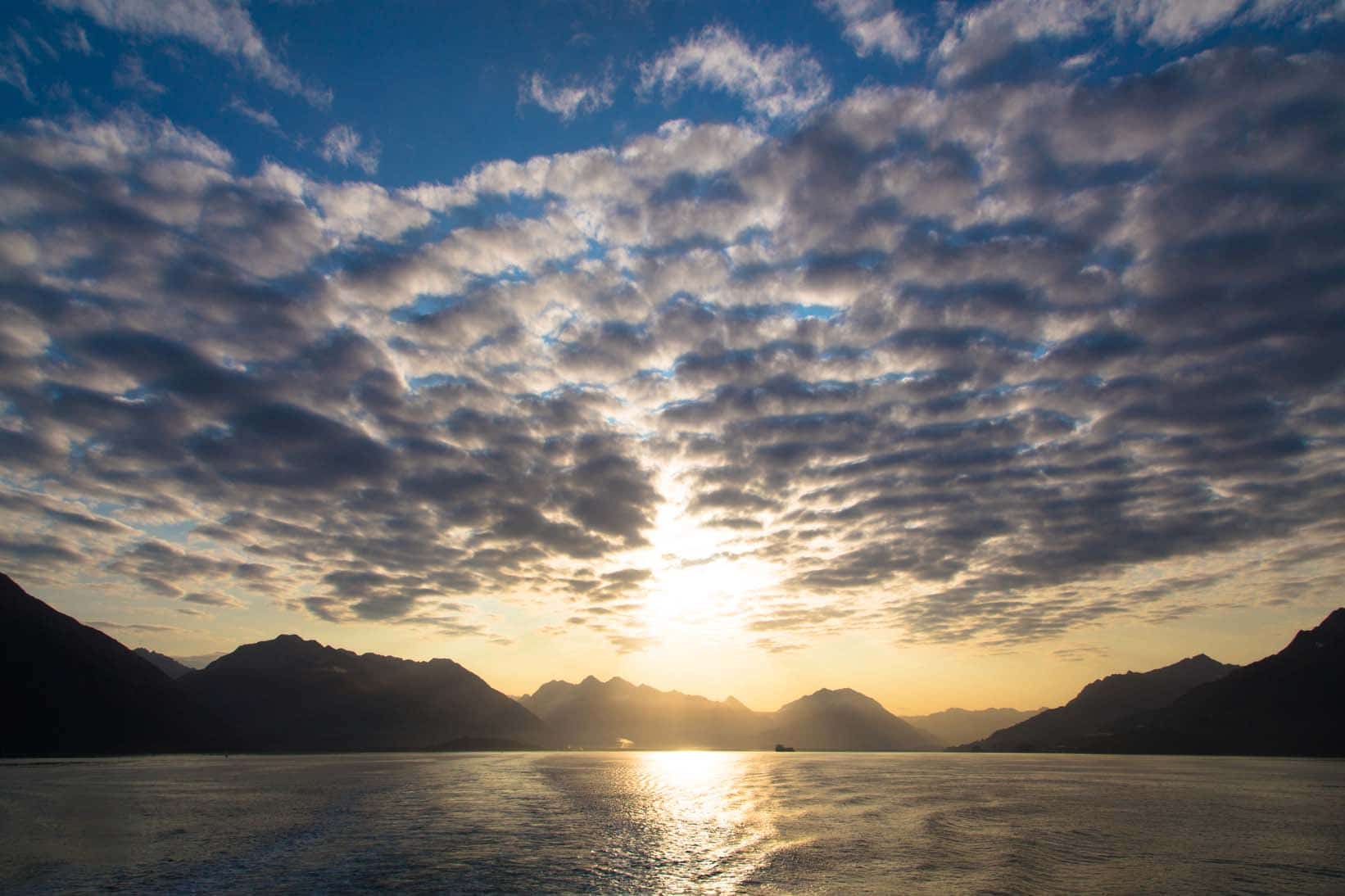 Up bright and early to catch the Valdez – Whittier Ferry on what’s known as the Alaska Marine Highway System. The journey, approximately 100 nautical miles, takes 5 hours 45 minutes and once we’re on board there’s little to do other than find a seat, sit back and watch the world go by. Bliss.

Despite us being among the first to arrive at the harbour (6:30 for a 7:30 departure), by the time our car is loaded all the front row seats are taken, and within minutes of setting sail, most of the occupants recline their seats and promptly fall asleep. Frustrating to say the least.

This aside, the journey is an absolute delight. We set off as the sun is rising through a smattering of light, herring-bone clouds and by the time we enter Prince William Sound, the sky is a clear blue and the views of the mountains sensational. Our time is split between our non-prime (but still ok) seats, the café / diner / galley where we get breakfast and lunch (both excellent); and out on deck, excitedly pointing out icebergs and groups of sea otters, surely the cutest of all marine mammals.

The final leg into Whittier takes us through Passage Canal where the mountains close in and huge glaciers pour down towards the sea to provide a spectacular end to a thoroughly memorable cruise.

Whittier itself is one of America’s stranger towns. It was established during WWII as a deep water port and logistics base, a project that also required the construction of a 2.5 mile (4 km) rail tunnel under Maynard Mountain, without which the facility – then known as Camp Sullivan – could only be reached by air or sea.

It remained an active Army facility until well into the 1960s and eventually became what it is today: a port of call for ferries and cruise ships and home to just over 200 people, the vast majority of whom live in a single 14-storey property, Begich Towers, built in 1957 to provide accommodation for military families and civil servants.

The Buckner Building nearby is even larger – once the largest in Alaska – and was referred to as the city under one roof. As well as a mess hall and sleeping quarters, there was a movie theatre, bowling alley and even a jail. Today it sits abandoned to the elements, its grey concrete blocks reminiscent of the worst of Soviet architecture.

The tunnel– now called the Anton Anderson Memorial Tunnel – remains the only land-based route in and out of Whittier but, thanks to some very clever engineering and logistics, it is now open to road traffic as well as rail, all on a single lane. When a train is coming through, road traffic has to wait. And when it’s clear for vehicles, east- and westbound road traffic takes turns in half hour slots. (The rails are set slightly below the road surface in case you were wondering).

Once out of the tunnel, the road – the Portage Glacier Highway – passes by Portage Lake and through the Chugach National Forest before reaching the junction with the Seward Highway, linking Seward with Anchorage.

It is here that we first see for ourselves the effect that the Swan Lake Fire is having. The largest of several fires raging in Alaska this summer, it was caused by a lightning strike and has been burning since early June. More than 150,000 acres of forest either side of the highway between Sterling and Cooper Landing have been consumed, the Sterling Highway itself has been closed at times due to poor visibility and fire encroachment, and communities have been evacuated or instructed to be prepared at short notice.

Its presence is immediately apparent from the dramatic change in the quality of light. Instead of the clear blue skies of the morning, the sun is obliterated by hazy smoke that hangs low in the sky, cloaking the tops of mountains like a dense fog. Fortunately for us, it only impacts our ability to see the landscape in its full glory today as we are heading south to Seward but it does raise slight concerns over the viability of the rest of our trip. We’ll see.

Our home for the next three nights is an apartment at Sauerdough Lodging, built in 1907 and formerly a general store, meeting hall and brothel. Situated in downtown Seward, away from the hotels and restaurants of the port area, it’s perfect, with full kitchen so we can self cater, views over bustling 4th Avenue with its cafes and craft shops, and a choice of characterful bars (Seward Alehouse being my favourite) no more than 200 yards away.