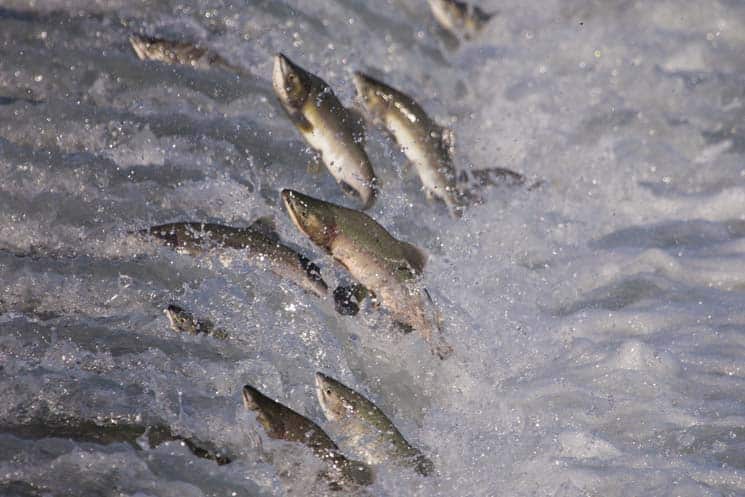 When we first planned this trip, our original intention had been to spend just a night in Valdez before taking advantage of the Alaska Marine Highway in the form of the Valdez – Whittier Ferry. However, it turns out that this runs every second day – eastbound one day, westbound the next – so we have bonus 24 hours in town and there’s plenty to do.

We start off with breakfast at The Fat Mermaid (it really is that good) then pay the first of a number of visits to the Solomon Gulch Hatchery on the opposite side of the fjord known as Port Valdez. The hatchery releases more than 250 million salmon fry every year and in late summer, approximately 16 million of them return. Some are harvested for their eggs, most are caught by the local fishing fleet.

Our visit coincides with the return season and the sea outside the hatchery is a seething mass of salmon attempting to enter the hatchery via the fish ladder. While this is an impressive sight in its own right, it’s not the only reason we’re here: the arrival of the salmon attracts bears as well as people and we’re told that it’s common to see them catching salmon by the tidal pools along the road. Sadly they don’t make an appearance for us (and we come back a couple more times during the day) but we tried.

On the way back into town we spend a pleasant half an hour exploring the Valdez Memorial Cemetery, the final resting place of residents from as far back as the late 1800s. There’s a leaflet you can pick up that pinpoints the graves of some of the more eminent names in the city’s history. And history is very much the focus of the next stop on our list, the Valdez Museum.

I’m slightly embarrassed to admit that we arrived in Valdez with next to no knowledge of the place; it’s somewhere we included on our route for simple reasons of geography, a stepping stone to the Kenai Peninsula. A couple of hours in the museum quickly fills this gap in our knowledge.

There are exhibits on native culture, the arrival of Captain Cook, Spanish then Russian exploration, the Gold Rush, the Trans-Alaska Pipeline System, mining, and fishing but two events stand out above all the rest.

The first was the Good Friday Earthquake of March 27, 1964. With a magnitude of 9.2, this was the second most powerful earthquake ever recorded and caused multiple tsunamis as well as landslides both on land and under the sea. The waterfront area of Valdez was washed away with the loss of 32 lives and the rest of the town deemed unsafe. Over the course of the next three years, the entire town was relocated to its present day site.

The second event was the Exxon Valdez oil spill in March 1989, when the Exxon Valdez oil tanker ran into Bligh reef, approximately 25 miles away, resulting in one of the world’s worst ever human-caused environmental disasters. While it is now more than 30 years since 11 million gallons of crude oil poured into Prince William Sound, it effects on industries such as fishing and tourism are said to be still felt.

Understandably, both events feature prominently at the museum, and recent years have seen significant upgrades to the exhibits with the addition of rarely-seen artifacts and interactive materials.

After leaving the museum we decide to visit the Old Town site and, truth be told, that’s all it is: the site where Valdez used to stand. Those buildings that weren’t moved were burned down so all that’s there now are a few historical markers indicating what used to stand on each lot.

And the rest of the day’s excitement? We’re almost two weeks into our trip so it’s time for some laundry back at our hotel (the Best Western Valdez Harbor Inn, selected for its proximity to the ferry harbour); early evening beers at, where else, The Fat Mermaid; and then – on the recommendation of the bar guy – back to the hotel restaurant for overpriced scallops and overcooked halibut, without doubt the worst meal of our entire trip.