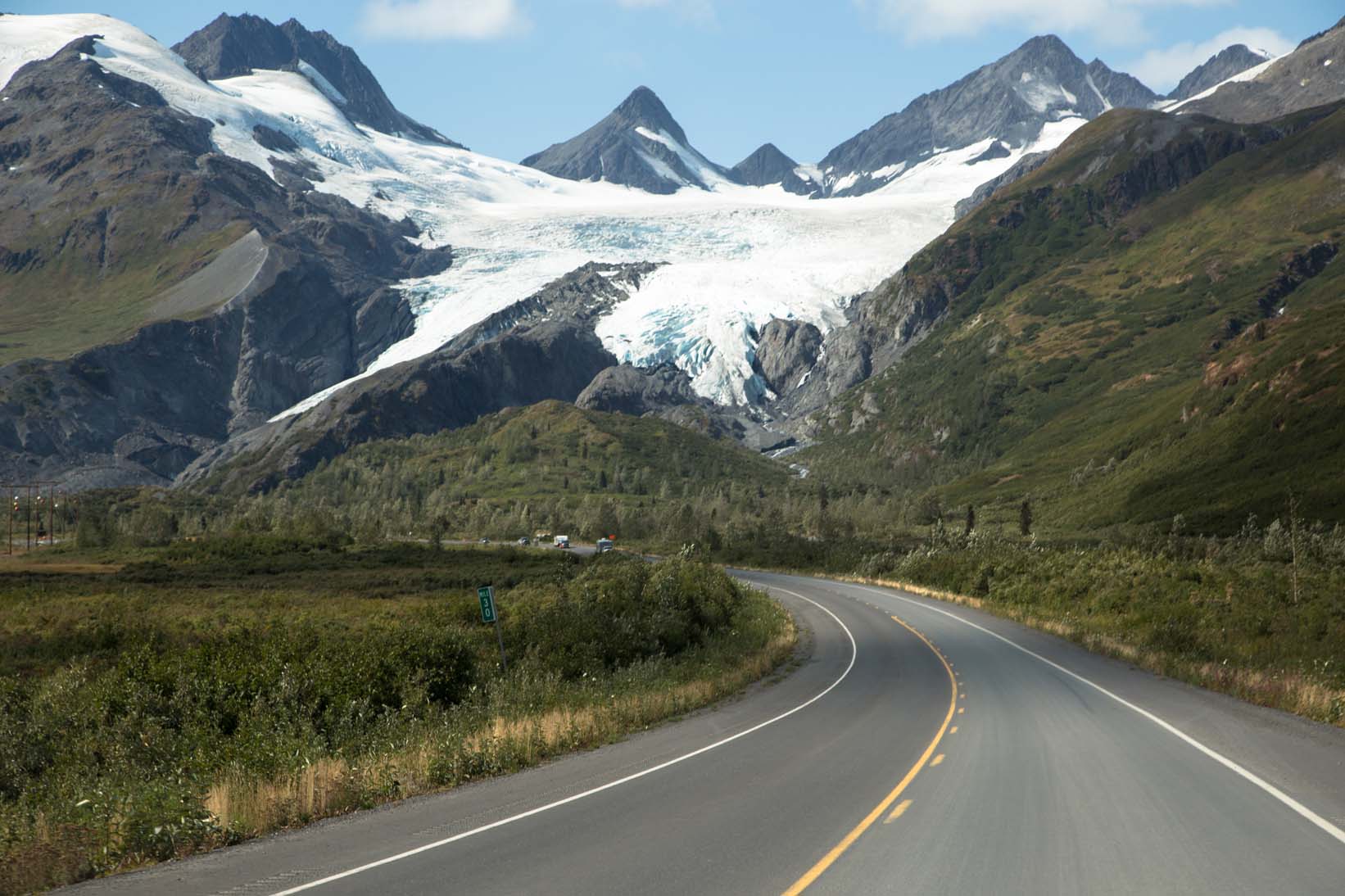 It may be – to borrow the words of Basil Fawlty – a case of “stating the bleedin’ obvious” but it’s amazing what a difference a good night’s sleep, a hot breakfast and a couple of coffees makes. Yesterday we completed the McCarthy Road without any of the above and, for Carole at least, it was an eminently less than enjoyable experience.

Today we tackle the return leg well rested, fed and caffeinated, and the drive is a delight. The morning light is beautiful, the sun rises behind us to burn away the clouds, and even the potholes appear shallower and less threatening to the health of our axles.

By mid-morning we’re passing through Chitina and, after a coffee stop in Kenny Lake, we’re soon back on the Richardson Highway with today’s destination, Valdez, just 80 miles south.

In a land blessed with such staggering scenery you begin to run out of superlatives but it’s hard to imagine a more spectacular drive than the second half of this short journey. The first 30-40 miles are far from forgettable but then – wallop! – everything seems to change in an instant and we’re struck speechless by the scale of the mountainous landscape into which we’ve been catapulted by Alaska Route 4. The road winds its way between the mountains, rising and falling over the foothills, passing fast-running rivers grey with glacial silt (aka rock flour, generated by the grinding of the ice on the bedrock).

Worthington Glacier is the best known and most accessible of the many glaciers along the route. Eye-catching from miles away and ever more impressive close up, it appears to flow down the mountain like lava from a volcano (it’s actually retreating but more slowly than many others: its location, Thompson Pass, is the snowiest place in the state). There’s a viewing platform just short hike away but we drive on, stopping instead at a pull-out point a few miles on where we just sit in silence and gaze out over the vastness towards distant peaks, waterfalls, lakes and forests. Wow. Just wow.

The final treat along the way is Keystone Canyon, a spectacular gorge just a few short miles of Valdez. Walls of slate, some almost perpendicular, rise up above the Lowe River for three miles, and in places the canyon narrows to as little as 100 feet. Numerous small waterfalls tumble down to the river and two – Horsetail Falls and Bridal Veil Falls – are spectacular enough to warrant their own turnouts.

Once in Valdez, we head to The Fat Mermaid by the dock for an excellent fish & chip lunch, then take a short stroll around town. It doesn’t take long to notice that Valdez appears to have an abundance of bunnies. Or, as some locals prefer to describe it, an infestation. Everywhere you look there are feral rabbits. In gardens, crossing the road, beside boardwalks, under cars. There are literally hundreds of them.

No one appears to know for sure how they got here but the variety of colours means they’re not wild. One person confidently tells us there was a rabbit farm nearby and some escaped; someone else is certain that they arrived in town when their owner, an old lady, passed away. Opinions are equally mixed. Some feed them over the winter, others want practice this making illegal. To most visitors, they’re just cute hence the fairly unlikely theory that they were deliberately introduced as a tourist attraction. Yeah … they’re nice enough, but …

The rest of the afternoon is spent at our wonderful little cabin at Valdez KOA Campground. We light a fire, make a coffee, catch up on email, sort the bags, read a little – all the things that are good to do every now and then on a road trip, in between the exciting bits. And in the evening I nip back into town for takeout pizza from The Fat Mermaid, and a couple of small beers while I wait. I could get to like Valdez.