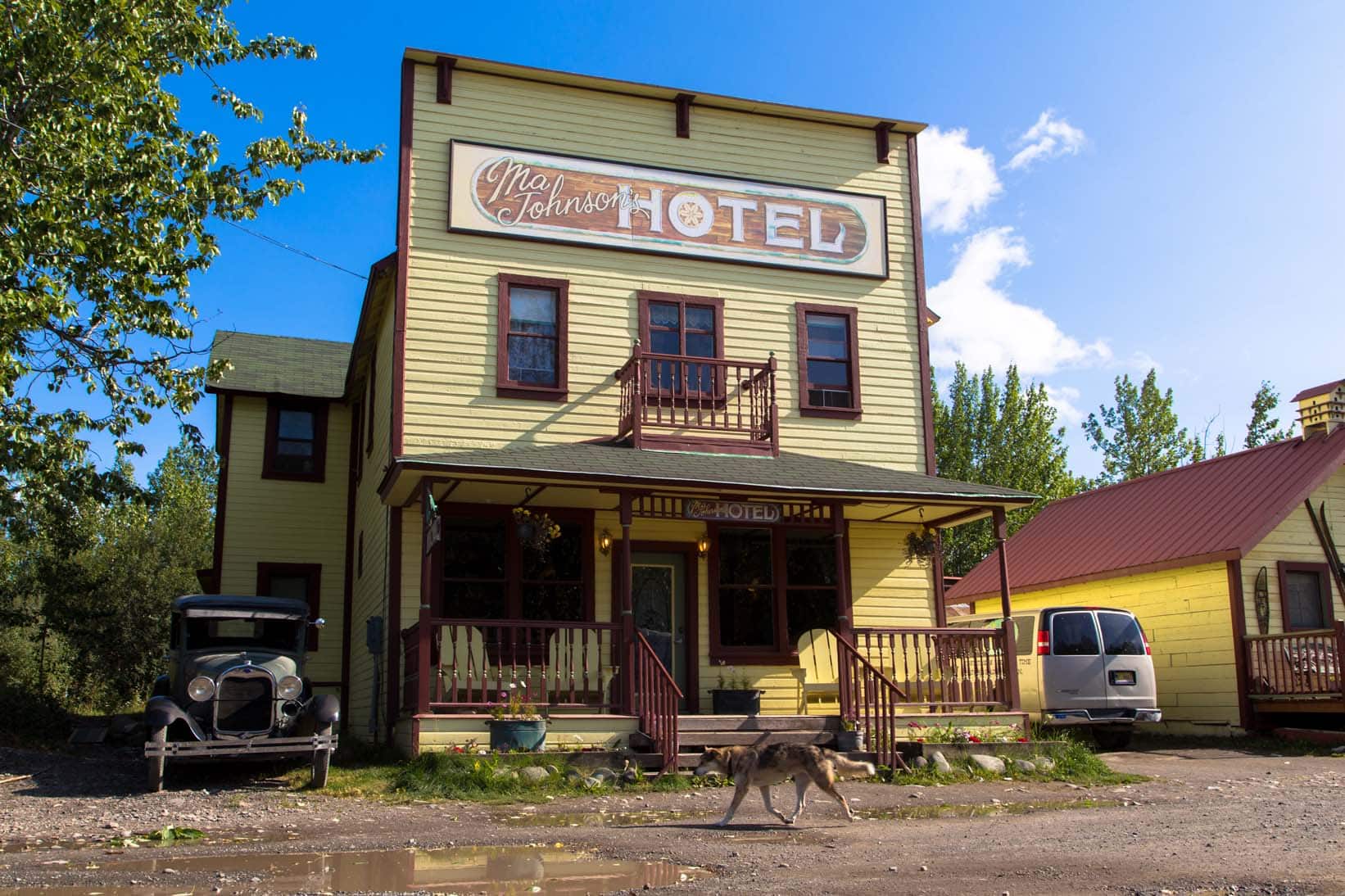 The day begins badly – a storm blew through town in the early hours, rattling shutters and sending stuff crashing so we’ve had little sleep – and it’s about to get worse. Not only has wind damage cut off Chitina’s electricity, but it seems that the water supply needs power too.

So no shower, no second flush of the toilet (too much detail?), and no coffee. Well, to their credit the staff at Gilpatrick’s Hotel do find a gas cooker and a pot of water to boil up but they’re unable to make more than a few cups at a time and we’re not the only ones crying out for our morning fix, which means it’s a 20 minute wait for a disappointingly weak and luke warm drink.

Anywhere else and we’d drive up the road to find a café with power but the closest community to Chitina is Kenny Lake, 25 miles in the wrong direction. So instead we embark on what promises to be the slowest and bumpiest leg of not just this trip but any we’ve ever made in the US.

The McCarthy Road is a 60-mile gravel-surfaced, washboard road that runs from Chitina to the town of McCarthy. It is rough and slow going, with rock falls, deep pot holes, sharp turns, narrow one-way bridges, and local traffic to watch out for. As a driver I have to say it’s actually tremendous fun – this road is why we rented a Jeep – but I can understand why someone riding shotgun, especially one who’s gone without coffee – might find the sudden but constant bumps and lurches a less than pleasureable experience, and I can sense that the sooner we reach our destination, the better.

Road conditions and co-pilot’s mood aside, it’s a wonderful drive through a tiny but spectacular section of Wrangell-St. Elias National Park. Stretching out of 13.2 million acres, this is America’s largest national park – equivalent in size to Yellowstone, Yosemite and Switzerland combined, according to the NPS web site – and is accessible via just two roads, this and the 42-mile Nabesna Road at the north.

This is real wilderness country, a landscape that is awe inspiring in scale and beauty, one of endless forest, snow-capped mountains and pristine blue lakes. The only sign of man’s presence is the occasional homestead or remnants of the old Copper River and Northwestern Railroad that used to haul copper from the Kennecott mine.

By late morning we pull up at the car park outside McCarthy – visitors’ vehicles can go no further – and head for the narrow footbridge that crosses Kennicott River and connects the town with the outside world. There’s a phone at one end so you can call the hotel and they will then send a shuttle to meet you at the other end of the bridge. That’s the idea at least.

I try four times but there’s no answer. What’s to do? Well we’re certainly not turning back so decide to walk into town with our luggage. (This isn’t quite as ridiculous as it sounds; our hotel has warned us that rooms are small so we should pack all we need in a carry-on size bag.)

There are two roads on the other side of the bridge, one straight ahead and one to the right. Fortunately I can clearly recall reading that you should take the road to the right, otherwise you’ll end up in the middle of nowhere. Or was it the other way round? And yes, after a sweaty half hour or so spent hauling our wheeled cases over stones and through ruts and puddles, it’s abundantly clear to one and all that I have compounded the misery of the caffeine-free morning and a never ending dirt road drive by fucking up on our walk into McCarthy. No words are spoken; they don’t need to be.

Halfway back to the bridge our saviour appears in the form of Neil, who’s passing by on his way to have a dog speyed. “You guys lost?” he asks, probably unnecessarily. We explain the situation and he instructs us to jump in the back of his truck. As we head back he calls the hotel to tell them there will be two discontented guests awaiting collection at the bridge in a few minutes’ time. Thanks Neil.

When we finally arrive at the hotel, we learn that Neil isn’t just any Neil, but The Neil. Neil Darish, businessman. The guy who bought up most of the town’s businesses and has spent the last 15-20 years injecting new life into this extraordinarily remote community. He owns the general store, the bar, the restaurant and yes, the hotel too. I’m guessing words were had with whoever should’ve taken our calls.

If any of this sounds familiar, it’s because life in McCarthy has been played out on the small screen over the four year run of the Discovery semi-reality / documentary series, Edge of Alaska. It’s not always clear whether the producers wanted to portray Neil’s role as that of good guy or bad guy but he gets my vote.

The town’s hotel, Ma Johnson’s , is packed full of character, all squeaky floorboards, old furniture, tiny bedrooms and shared bathrooms. It wouldn’t do for more than a night or two but it positively oozes charm. There are no room keys because there are no locks – “There’s no crime in McCarthy” they reassure us – and we certainly don’t feel anything less than 100% secure and comfortable.

Revived by coffee and lunch, we take the shuttle bus up to the historic mining town of Kennecott, five miles away. Once the richest known concentration of copper in the world, the mine operated from 1911 to 1938 and necessitated the construction of the 196 mile CR&NW railway and the formation of a steamship company to transport the ore.

After it closed in 1938, it was left to rot until the 1980s, when people started to show an interest in the old buildings. Today, visitors come from all over the world to wander through its NPS-protected structures, and marvel at the scale of the equipment needed to process ore in such quantities.

We also find time to visit the McCarthy–Kennicott Historical Museum, home to a collection of fascinating photos, documents, and artifacts relating to the town’s short but colourful history. One exhibit in particular catches our eye, the story of the McCarthy Massacre.

In 1983, angered by the opening of the Trans-Alaska oil pipeline, 39 year old computer programmer Louis D. Hastings decided to hijack McCarthy’s mail plane when it arrived on its weekly visit, fly to the pipeline and blow it up. This plan involved killing anyone who got in his way, resulting in six of the town’s population of 22 being shot dead before his rampage ended.

But don’t worry about the lack of locks in the hotel: there’s no crime in McCarthy.

Our evening begins with local beers in The Golden Saloon in the company of a couple of gregarious Texan bikers who delight in telling us the McCarthy Road takes less than two hours on two wheels (not that I think this would have enhanced the experience as far as Carole’s concerned).

From here we move next door to what may well be the most impressive of Neil Darish’s achievements, The McCarthy Lodge. Originally a cannery building on the coast, it arrived here in 1916 and served as a store before being used as a hunting lodge.

It is now the location of a fine dining restaurant specialising in locally reared duck and pork, Copper River Red Salmon, and other Alaskan seafood including halibut and black cod. We go with belly pork and halibut cheek appetisers, share an elk and mash main and finish off with a boozy pudding of some description. It really is extraordinary, without doubt the best meal of our entire trip. Someone tells us that there are just four qualified sommeliers in the whole of Alaska, and two of them work here. Whether that’s true or not I don’t know but it wouldn’t surprise me.

I guess you can understand why some residents might prefer McCarthy to have been left as off grid as it once was but, for better or for worse, what Neil Darish has achieved is mind blowing.