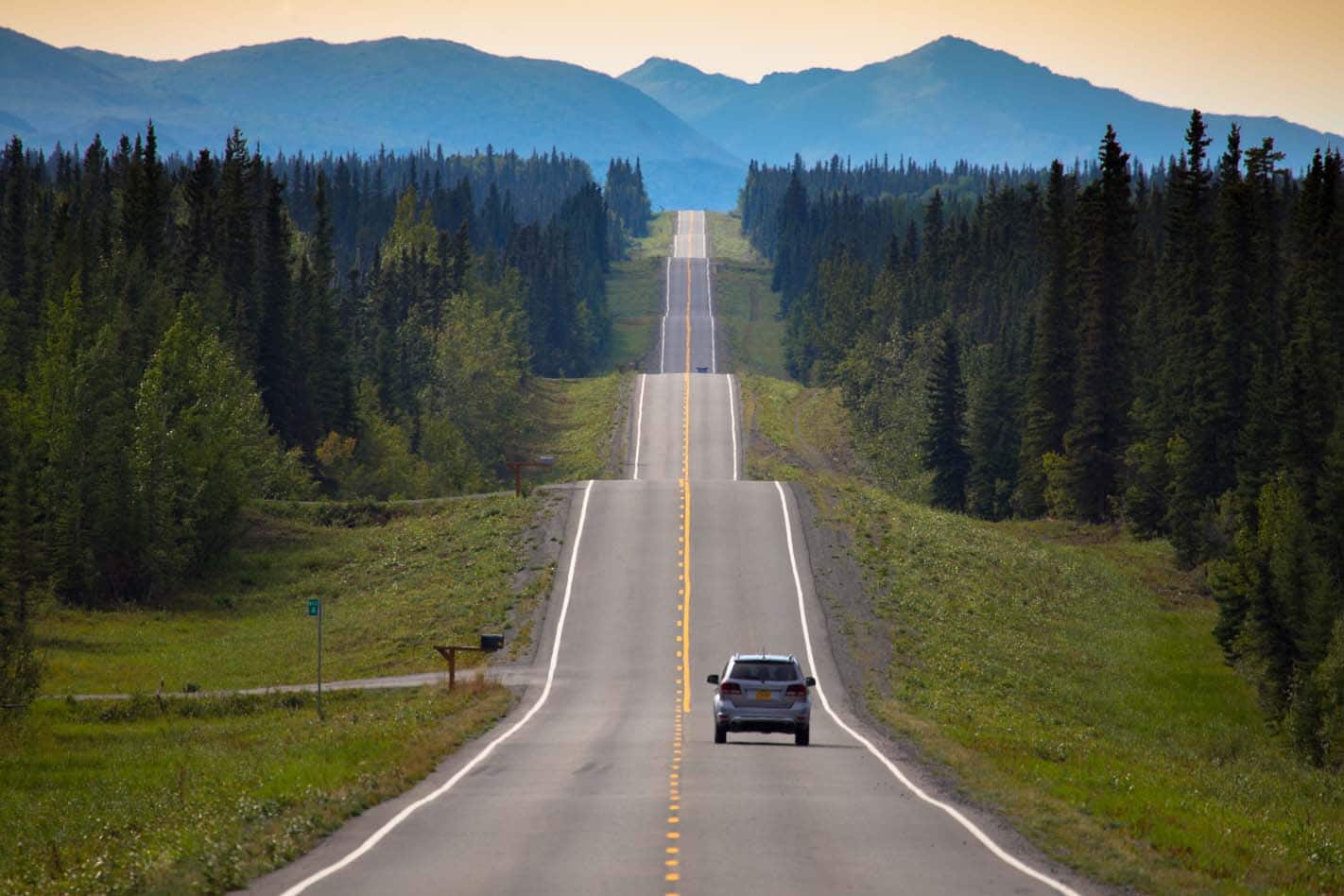 Today begins as yesterday ended so we load up the car in the pouring rain and set off south in a fairly wet and steamy state. Breakfast is at Salchaket Roadhouse and we press on through the puddles and greyness.

Highlights are few and far between but we stop for coffee and nature break in Delta Junction and take a look around the Sullivan Roadhouse Historical Museum. This wonderfully characterful log cabin – the oldest original roadhouse in Alaska’s interior – was built in 1905 and served as a roadhouse on the Donnelly-Washburn winter cut-off, a part of the newly opened Valdez-Fairbanks Trail. It was abandoned in the 1920s and over the following decades survived fire and the constant threat of obliteration by a poorly targeted shell on the adjacent Oklahoma Bombing Range.

In the 1970s, the Army moved it log by log to where it sits today in Delta Junction and it is now home to a large collection of historical artefacts, furniture, clothing and photographs. Even if you only have 10 minutes to spare, it’s worth it – you certainly come away with an idea of how difficult life was in the days of the early pioneers.

Our journey continues on the Richardson Highway, through the spectacular Delta River valley with walls so steep and tall they disappear into the low cloud. Forty miles south of Delta Junction there’s an excellent view of the Trans-Alaska Pipeline System, the 800-mile, $8 billion tube that transports oil from a pumping station in Prudhoe Bay to the Valdez Marine Terminal. Seeing it close up – and how it literally cuts through the landscape – brings home what a staggering endeavour this was, and makes the fact that the whole thing was built in just three years even more impressive.

Our drive south continues and gradually the rain lightens before stopping altogether. Even the clouds begin to disappear, revealing hints of blue sky for the first time in four days.

Finally we see the signs for Alaska Highway 10, the Edgerton Highway, and head east towards tonight’s destination, the little town of Chitina.

While by no means a ghost town – population is around the 120 mark – Chitina has a remote and rugged feel to it. It may describe itself as a “gateway” to Wrangell-St. Elias National Park, but aside from Gilpatrick’s Hotel with its restaurant and bar, Uncle Tom’s Tavern over the road, and a small art gallery, there’s not much else in the way of infrastructure to support those passing travelling into the park. (So get your gas and provisions in Kenny Lake, which you’ll pass about 10 minutes after exiting the Richardson Highway.)

The hotel is fairly basic – small rooms, no TV – but perfectly serviceable. The restaurant menu is varied and imaginative, covering everything from steaks, pasta and chicken to halibut and crab dishes. Maybe it’s a little too ambitious – we’re not overly impressed with ours – but on-line reviews are without exception positive so it seems we’re the exception in this respect.

Uncle Tom’s on the other hand, more than lives up to expectations. If ever there was a bar that was going to reflect our preconceived ideas of Alaska, this is it. The pool table is hidden under a massive grizzly hide; the walls are covered floor to ceiling with faded photos, guns, trophies, vintage licence plates, and other Alaskana (think localised Americana); seating is up at the bar, and Tom serves us cold cans out of the fridge. It’s been a 300+ mile driving day, we’ve earned it.

Alaska Day 11: McCarthy and the Kennecott Mine

Alaska Day 17: Seward to Homer on the Sterling Highway