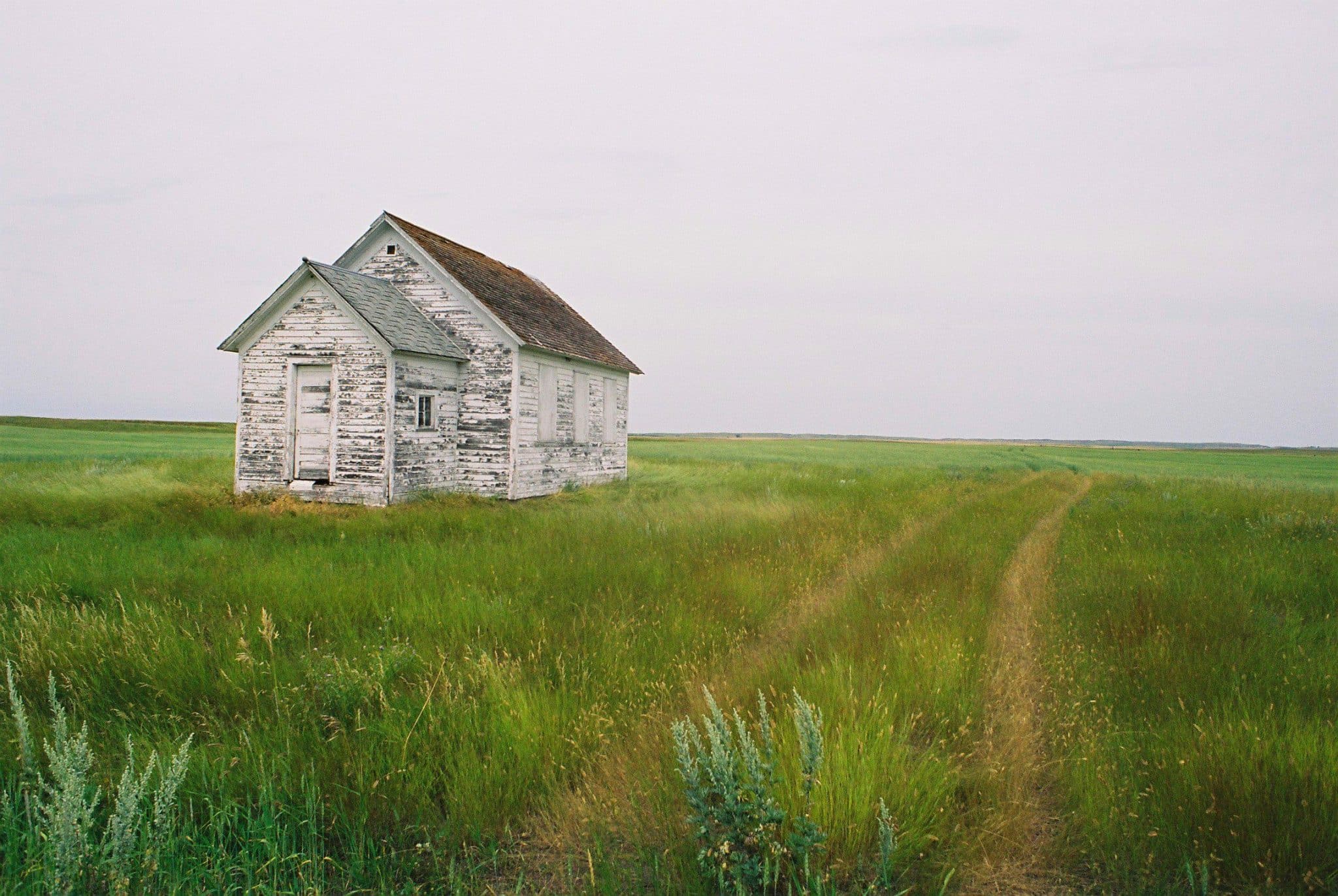 “Do you reckon that’s it?” “Well, yes, I reckon it must be.” In front of us stands a TV mast, the KVLY-TV Tower, just south-east of Blanchard, Traill County, North Dakota. Our slightly out-of-date road atlas tells us that, at 2,063 ft, this is the World’s Tallest Structure, as indeed it was until the completion of the Burj Khalifa in Dubai. But viewed from the side of the road, a couple of fields away, it’s a bit like looking at a sewing needle held out at arm’s length.

Ah well, it’s given us the excuse to take a slightly roundabout route from the lovely city of Fargo – all trendy food outlets and restored historic buildings – to our destination for tonight, Jamestown.

This is agricultural country, battleship grey grain elevators blending into the leaden skies and small town stores selling farmers’ supplies. We drive through Hunter on State Highway 18, and Galesburg on County Highway 16, both looking like they haven’t changed in 40 years or more, and every passing driver acknowledges our presence with a nod and a brief raise of a finger.

Heading west on ND Hwy 200, the clouds begin to break and let the sun reach down onto the green fields that stretch out to the horizon in every direction. North Dakota is the USA’s leading producer of  a number of crops including spring wheat, durum wheat, barley and sunflowers. As they teach the kids round here: “every time you eat spaghetti, chances are there’s North Dakota durum in it.”

This is also a sparsely populated state; there are fewer than 10 people for every one of its 70,000 square miles (only Montana, Wyoming and Alaska offer even more room to breathe). This lack of major centers of population made it an ideal location for nuclear missile sites during the Cold War and remnants of this history can still be seen today. Just east of Cooperstown, we stretch our legs at the Ronald Reagan Minuteman Missile State Historic Site “November-33” facility, a concrete-and-steel missile silo from which, should the Presidential finger have ever descended on the button, Minuteman missiles would have been sent on their merry way to Moscow.

The Strategic Arms Reduction Treaty (START) saw the site decommissioned in the 1990s and you can wander around freely at ground level. It’s an odd place to visit. When people talk of stockpiles of nuclear weapons, I imagine state-of-the-art launch facilities (12-inch thick steel doors, flashing lights and Bond villians stroking cats, that kind of thing) not a concrete bunker in the middle of a North Dakota field. But I guess it did the job.

Day two of our drive begins at Jamestown’s National Buffalo Museum, home to the World’s Largest Buffalo, a 60 ton concrete construction, and White Cloud, a rare albino buffalo who, along with a herd made up of two other white buffalo (so actually not all that rare really) and 30 standard-coloured beasts, lives in a 250 acre tract of land adjacent to the museum.

Unsurprisingly, the 26 ft tall model proves easier to spot than any of the live animals, albino or otherwise, but our patience is eventually rewarded by the impressive sight of White Cloud making her way from one piece of cover to another. You can understand just how distinctively these creatures would stand out in a herd of thousands, leading the Lakota Sioux to consider them sacred animals.

From Jamestown we make our way north for a few miles before heading west on State Highway 36, a two-lane backroad selected at random for no other reason than it’s not the Interstate. And what a treat it delivers.

One of the main reasons for making sure this year’s roadtrip passed through North Dakota was an article, The Emptied Prairie, that appeared in the January 2008 issue of National Geographic. The focus of the piece was the gradual depopulation of rural North Dakota, for reasons ranging from the realisation that promises of rich farmland were, to be blunt, lies, through to drought, the Great Depression and, for many, the simple inability to cope with the relentless cold wind for one winter more.

This exodus manifests itself in the hundreds if not thousands of abandoned homesteads that dot the High Plains, and the 90 miles we drive along Hwy 36 is like stepping into the pages of the article.

One minute we’re pulling up next to an empty schoolhouse, the thick layers of dust and cobwebs inside allowing only the dimmest of views through the small glass windows; the next we’re stepping over what remains of the walls of a pathetically small stone-built homestead, long since abandoned to the wind and the rain.

Perhaps most poignant of all however are the derelict but relatively modern-looking properties that bear clear signs of having been lived in not that long ago: garishly coloured carpets left to go mouldy; furniture too cheap to make it worth carrying away; items of clothing now so decayed they’d turn to dust in your hands; broken light bulbs, and, oddly, given the almost complete lack of glass in the window frames, large numbers of dead birds. Plaques nailed to the wall in one place even give the names of those who’d lived there: ‘Larry’, ‘Mike’ and ‘Pam’.

There’s a bleak, melancholy beauty to these places, one that’s intensified by the grey skies and chill wind that blows across the high plains, causing a nearby barn door to sway in its final death throes.

The world and his wife know everything there is to know about the 1930s Dust Bowl but next to nothing about the hardships endured by those who tried, and frequently failed, to eek a living out of the soils of North Dakota. I wonder how different this would be had the High Plains had their own Woody Guthrie?

What ND does have however is Lewis and Clark. Or at least enough of a chunk of Lewis and Clark heritage to make it feel as if the pair were at least adopted if not actual sons of the state. It was on land that is now modern day North Dakota that the Corps of Discovery enjoyed their first encounter with a “verry large and turrible” grizzly bear; it was here that they met Toussaint Charbonneau and his pregnant wife, Sacagawea; and it was where they constructed Fort Mandan, on the banks of the Missouri, to provide shelter through the bitterly cold winter of 1804/05.

Our drive to the western terminus of Hwy 36 brings us to within 20 miles of an authentic reconstruction of Fort Mandan. So, deciding that a bit of “Lewis & Clark slept here” tourism is just what we need after the somewhat sombre reality of the impact of drought, depression and subprime mortgage lending, we delay our arrival in Bismarck by a couple of hours and head north instead.

There are two L&C sites to visit. The first, the North Dakota Lewis & Clark Interpretive Center, is the kind of museum your parents used to drag you round as a kid; lots of explanatory boards and panels interspersed with a few nuggets in the form of a buffalo skin you can drap over yourself and a large wooden canoe. Actually, that’s unfairly dismissive. The promotional material says it’s a “multimillion-dollar historical trove … filled with rare artifacts, enagaging displays and interactive wonders” and even if you end up thinking that’s slightly over-egging its appeal , it’s certainly worth a visit before driving the final two miles to Fort Mandan; think of it as the spinach you’ve got to eat before you’re allowed any ice cream.

Fort Mandan is a different kettle of fish altogether, a brilliant full-scale reconstruction of the fort at which the party spent146 nights (with the invaluable support of the local Mandan-Hidatsa Indians) and where, on February 11, 1805, Sacagawea gave birth to her son Jean-Baptiste.

Each room is kitted out as it would have been over 200 years ago, with furs and blankets on the beds and muskets and uniforms hanging on the walls, and guides are on hand to provides the insights into the party’s time there that bring the whole thing to life. Take a stroll by the majestic Missouri River, just a stone’s throw from the gates of the Fort, and you’ll leave with more of an idea of what life as a member of the Corps of Discovery must have been like than any number of books could tell you.

And so on to Bismarck, and an admission: it may be a gaping hole at the end of this first leg of our journey across the southern half of North Dakota, but I’m unable to contribute anything in terms of the atmosphere or personality of the state capital.

Two circuits of the downtown area fail to unearth anything remotely resembling a hotel so we admit defeat and retreat to a faceless mall close to the Interstate. And our choices for dinner? Should we try the Space Aliens Grill & Bar or maybe the North Pacific King Crab Legs on offer at the Red Lobster are a more traditional North Dakotan dish? Deciding that deep-fried extraterrestrials are probably fresher in New Mexico, we have the fish.

Wyoming: Across the Cowboy State to Yellowstone

Deer, beer and sex – the Midwest